Everyone thought it was odd at the time when Joe Biden kept mentioning a Dark Winter.. It was so dark and cryptic.. Jim Stone comes up with this analysis that he claims prove the Biden Administration was behind the Texas disaster.

The following text from DOE Order No. 202-21-1 that was excerpted by Jim Stone in his screenshot below described what Texas applied for (and was rejected on environmental grounds) in response to the current weather crisis in that state:

“According to ERCOT, the measures taken by ERCOT and other state agencies may not prove sufficient to avoid rotating outages of as much as 4,000 MW… ERCOT requests that the Secretary issue an order immediately, effective February 14, 2021 through February 19, 2021, authorizing “the provision of additional energy from all generation units subject to emissions or other permit limits” in the ERCOT region.”

WE NOW HAVE PROOF WHAT HAPPENED IN TEXAS WAS A DIRECT ASSAULT BY THE BIDEN ADMINISTRATION. THIS WAS THE OPENING VOLLEY OF BIDEN’S “DARK WINTER”, NOW PROVEN

The Biden administration, via the DOE, issued the order to wreck Texas. THIS IS WHAT VOTE FRAUD LOOKS LIKE. 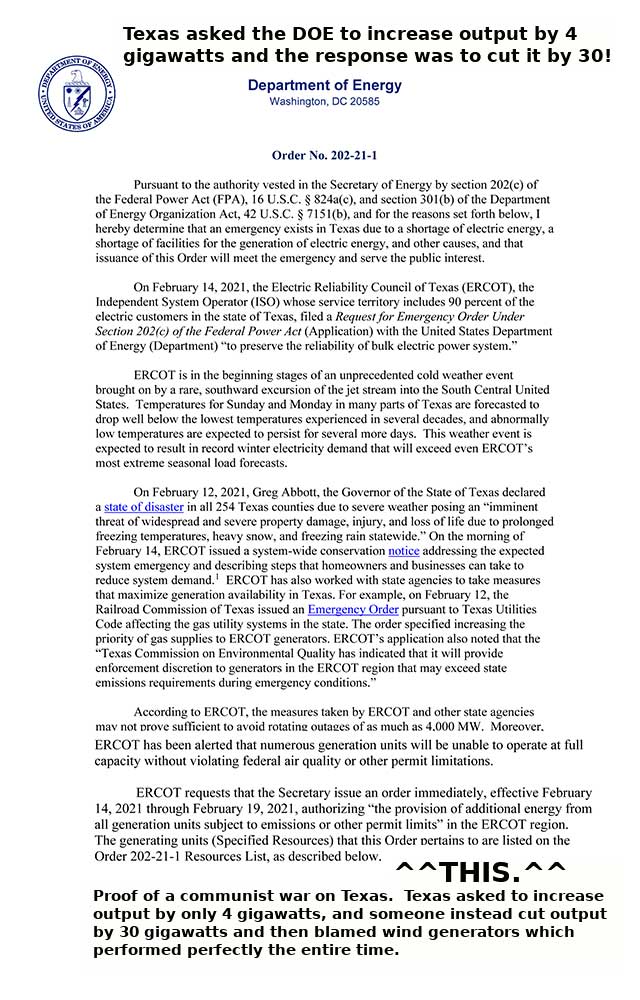 Operation choke point: The Communist method of shutting down conservatives

The Federalist did an excellent report about how banks are now going to be shutting down gun shops and conservatives in general for “not being liberal enough”, that’s the gist of the report and I suggest people read the whole thing. We are fast approaching a time, (and I mean within the year) where conservatives WILL be cut off completely from all financial services. Just wait. It will happen.

The gist of this is if you do anything that goes against what is pushed on CNN, you’ll be labeled a fraud, and the fraud laws will be enforced to put you out of business even if your business is perfectly clean. Ditto for your employer, they’ll be forced to fire you or they will be shut down, and once fired, your bank accounts will be GONE. This is SOP for the communists and cold hard proof a revolution is underway NOW. This is one of their cornerstones of genocide. Their favorite method: Starvation.

Ted Cruz flew to Cancun during blackouts, and that’s supposed to be wrong???

I’l state it openly: Cruz is a slime ball. I don’t like him at all. But to rip him for flying to Cancun during the blackouts is ridiculous, who on earth would not if they had a chance? What, if you have options you can’t take them and just have to sit there and suck it up? Ridiculous. I disagree. I would never vote for him unless he ran against Nut Yahoo and they were the only two choices, but I can’t see the wrong here. What was he supposed to do? Sit in the dark and cry for everyone?

My response: read more than just the top few lines of this page. I warned people within 24 hours of the start of this electrical disaster exactly what would happen, and even posted calculated power bills for when it would be all over.

I also stated that not all utilities would do this and that any of them that did not have rate acceptance set to “auto” would avoid this. I did not specifically name what utilities would end up sending people bills for thousands of dollars but warned people it could happen, and to shut off everything possible. Now the reality is rolling in and we are going to be looking at bankruptcies. This was the first site to catch on and report this, I beat everyone to the punch and it was based completely on seeing how high the wholesale electrical rates went. I knew a lot of people would be absolutely screwed before anyone got a bill.

And I’d also like to repeat that what happened in Texas was an act of war done by Jewish infiltrators in the Texas power grid. For no reason at all, they switched off coal and nuclear to create a shortage while wind power OVER PRODUCED, (this was not caused by wind power, it was direct sabotage) and the filthy ***tards were waiting, and as soon as the shortages hit they increased the price by 1,000X. Not 1,000 percent, BY 1000X. And based on what I have seen happen in decades past, they absolutely WILL get away with this. Before doing such things, they make damn good and sure they have the correct courts totally corrupted.

There are lots of little items regarding Biden, that people probably already know. Often if the MSM covers them, I figure people already know so I don’t post it. However –

Biden really is trying to set up restrictions on interstate travel and wants to put a system in place where a passport-type system and permission are needed to do it. That is dangerous, and exactly like soviet Russia. Every state is to have border checkpoints at all entries (eventually) in this system.

Everyone ought to know that Biden repealed Trump’s executive order barring foreign nations from tampering with America’s power grid. Biden has rescinded that order “for 90 days” but you can bet it is permanent. Reason: They want to blame their own shut down of the grid-like they did in Texas (nothing at all in Texas malfunctioned, infiltrators simply shut it down) and when this is applied on a national scale, those who do it want to point the finger at someone else.

And finally – Biden has gone off the deep end and spent three days playing video games at Camp David. That’s a lot worse than golf. He’s so far gone Kamala is the de-facto president. This is actually a lot more significant than it appears. Because towards the end of the campaign, they had Biden so souped-up on various concoctions he actually looked halfway decent. Even I wondered if they had a way to resurrect people. But no, all they did was prop his brain up amazingly well and they blew every last fuse, a month later he’s going down for the count. He’s a goner.

Many burst water pipes in Texas –

I am surprised. There are many videos where people are walking around in flooded houses not even trying to shut the water off. And if they had shut the water off to begin with, no disaster. Do that many people really not know that?

I guess I’ll let out (again) what a lot of people must think is a secret – There is a water shut-off you can access in your front yard. If it is not in the middle of the yard, it is out near the curb. It looks like a round metal thing in the grass. Take the cap off. It will look like a pipe going down. AND Every house, when new, comes with one of these tools: 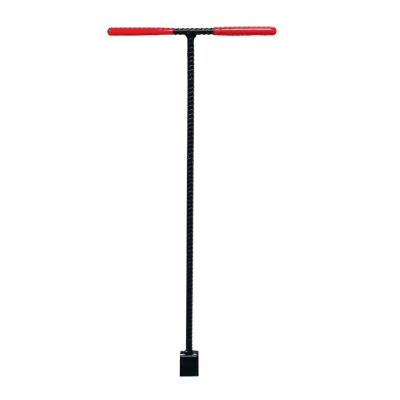 but I imagine most people discard them, wondering what they are. “THEY ARE” to save your house when a water disaster happens. If you don’t have this you had better get one and learn how to use it by shutting your own water off and on as a practice. 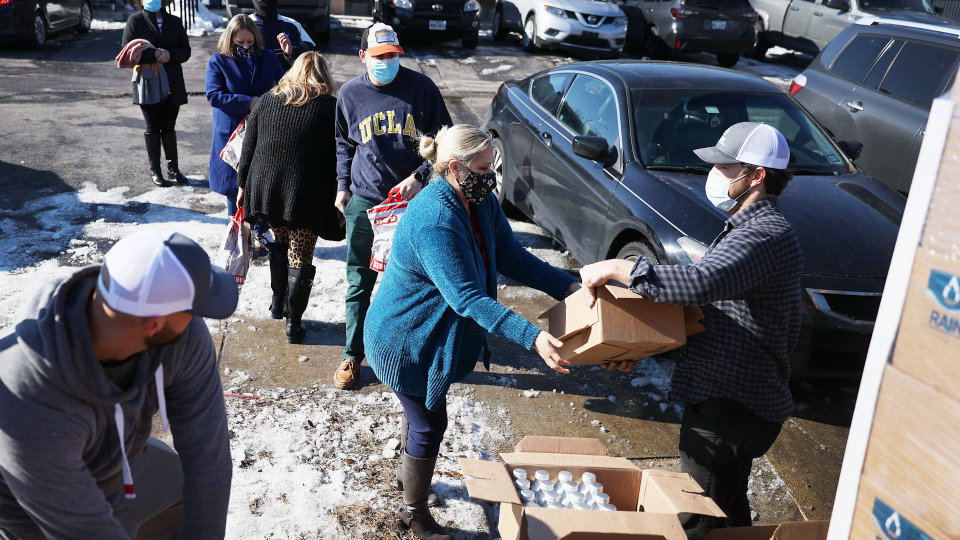