Do you remember the moral riddle taught in grade school called the “Bystander at the Switch” (also known as the Trolley Problem)? It was a story about a runaway train hurtling towards a cluster of people stuck on the tracks ahead. But you have the option to pull the switch and send the train down another track with a smaller number of people on it. You have the option of saving some lives by sacrificing a smaller number of others. Do you pull the switch?

In grade school the riddle was posed as a moral dilemma. But it’s not. There was only ever one correct choice. We invented universal human rights to make it clear that no person or government has the right to pull the switch to send the train down another track towards a sacrificial group of victims.

Lockdowns during COVID pose the exact same question as the Bystander at the Switch. But it’s not a game; once again there are real lives at stake. Yet in direct violation of the principles of universal human rights, governments around the world are choosing to pull the switch by imposing lockdowns “for our safety.” In doing so they have given themselves the authority to play God with our lives.

What about the collateral damage caused by lockdowns? Mandatory lockdowns are leading to the deaths of countless individuals through cancelled/delayed medical operations, suicides, drug overdoses, loneliness and isolation in nursing homes, and more. None of these deaths would happen without lockdowns. Government is throwing one group of people onto the tracks with the goal of saving another. 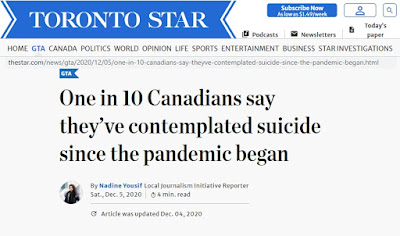 And how many people is the government allowed to force into poverty and starvation “for your safety”? Visitors to food banks are not just soaring here at home. We live in an interconnected world. What we do in one part of the world sets precedents and causes economic ripples that reach the farthest corners of the globe. Do those lives matter?

The head of the World Food Program WFP has warned that the “equivalent of 400 million full-time jobs have been destroyed” by government mandated COVID lockdowns and that there are now “270 million people marching towards the brink of starvation” (full article here). 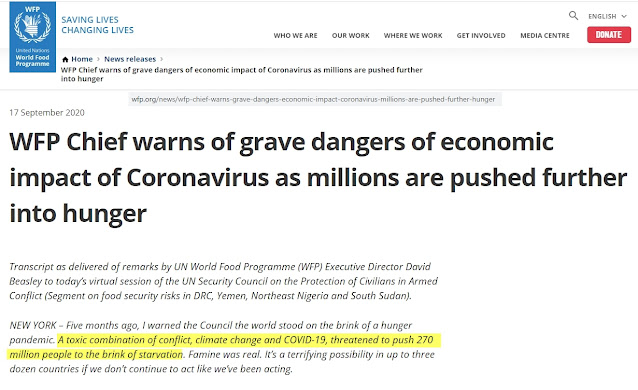 Here are a few excerpts that I hope make you very uncomfortable:

On jobs lost during COVID:

Increased child deaths in Africa due to missed routine vaccinations:

Starvation in the Democratic Republic of the Congo:

Let’s be clear, this unfolding horror is not because of COVID, it is because of the government’s response to COVID. By crossing the line from making recommendations to imposing laws that take away the people’s right to decide for themselves how to balance their risks and priorities, economies are grinding to a halt and millions are being forced into starvation. And the carnage doesn’t miraculously end when the virus fades away. The slow-moving forces set in motion will be with us for a long time and in the meantime the bodies will just keep piling up. Should they be asked to pay this price “for your safety”? Or perhaps they don’t matter since the media isn’t counting them and can’t leverage them into click-bait to exploit your feeling of vulnerability to the virus?

The first principle in medicine is the Hippocratic Oath, which says, “First do no harm.” One consequence of this rule is that you’re not allowed to protect one group of people by harming another. Empathy for one group doesn’t give you the right to trample another. In the Trolly Problem, it’s completely unethical (medical malpractice) for any doctor to pull the switch.

Yet health authorities imposing lockdowns are nevertheless inflicting horrific harms on those least at risk from the virus (the young and healthy) with the excuse that this is justified to protect those most at risk (the very old, especially those with pre-existing health conditions). This is a direct violation of the Hippocratic Oath. And it’s completely nonsensical. If you’re unwilling to risk exposure to the virus, stay home. Your risk as you shelter at home is exactly the same whether I’m at home in lockdown or whether I’m at work to feed my family or visiting my loved ones to protect my (or their) mental health.

The right to individual autonomy was specifically invented to allow free people to weigh their risks and priorities. For most of us there are many risks in our daily lives (like being unable to feed our families) that are far more dangerous than a virus that even the US CDC says has an infection survival rate of 99.997% for those under 20 years of age, 99.98% for 20 to 49 year olds, 99.5% for 50 to 69 year olds and 94.6% for anyone over the age of 70. To put that in perspective, Dr. John Ioannidis, professor of epidemiology and biomedical statistics at the University of Stanford, has calculated that for people under the age of 65, the COVID death risk is “equivalent to the death risk of driving from between 9 miles per day (in Germany) and 415 miles per day (in New York City).” 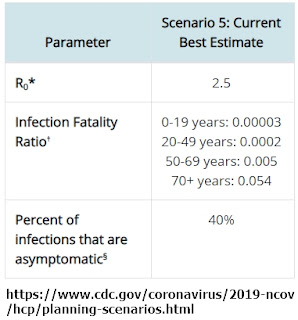 Lockdowns don’t help those most at risk if they are already segregated from society in nursing homes. But isolation does accelerate deteriorating health conditions among nursing home patients who are denied the ability to spend the last few months of their lives surrounded by loved ones.

By trying to “flatten the curve”, lockdowns only extend the amount of time it takes for the rest of the population to acquire herd immunity, which increases the amount of time that the most vulnerable are at risk of being exposed to others carrying the virus. Instead of self-isolating for a month while the virus runs its course among the rest of the population (like influenza does every winter) they have now been at risk of catching COVID from the rest of us for almost 10 months – 10 months during which many have been forcibly stuck in isolation, separated from their loved ones!

Another excuse given for lockdowns is that the health care system is at risk of getting overwhelmed. It’s another bizarre and immoral argument. Since when does access to health care override our right to freedom, individual autonomy, and the ability to try to feed our families? If that were an acceptable excuse for lockdowns, the government would pull the switch and lock down society every winter. Hallway medicine and overworked hospital staff have long been the norm of our poorly managed health care systems every flu season. Here is a small sample of news articles illustrating the problem. Check the dates – all are from before COVID!

This CBC article from January of 2020 shows that from January to June 2019 (180 days) some of the most overcrowded hospitals in Ontario spent between 148 and 179 of the 180-day study period operating above 100% capacity. In other words, they were essentially operating above capacity every single day! 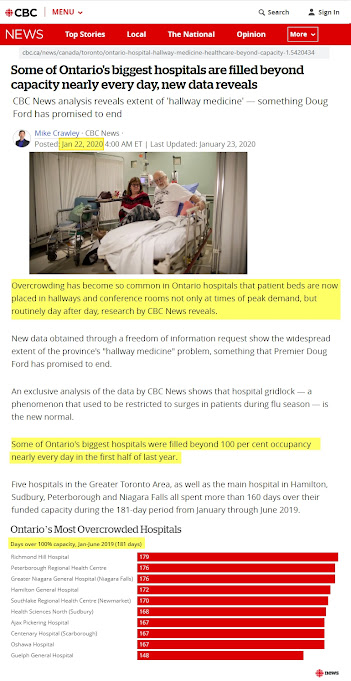 This CBC article from February 2018 shows hospitals in Quebec running at up to 245% capacity. 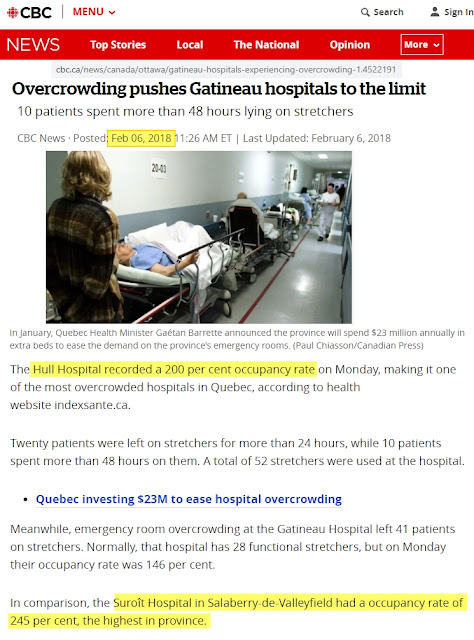 This CBC article from May 2019 discusses how common it has become for patients to be housed not just in hallways, but even in bathrooms! 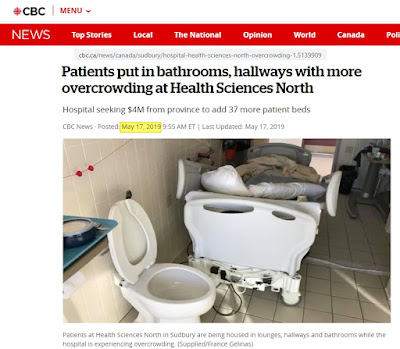 And this CTV article from January 2019 demonstrates that in Ontario about 1000 patients were being treated in hospital hallways every single day long before COVID hit. For context, as I write this today, January 21st, 2021, Ontario (a province of over 14 million) has a grand total of 1,533 COVID hospitalizations in the entire province. None are currently being treated in hallways; some hospitals are nearing capacity, but as I’ve just finished showing you, that means they are below the typical occupancy levels seen at this time of year prior to COVID. 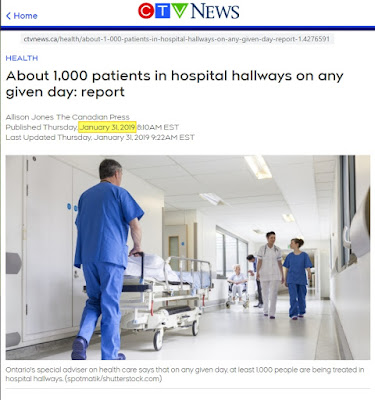 I’ve posted even more examples of the pre-COVID hospital crisis on a Twitter thread here.

The government’s failure to provide adequate health care capacity is not an exemption that allows government to suspend the constitutional rights and freedoms of its citizens. But I encourage you to read the Universal Declaration of Human Rights to check for yourself.

And that brings up the other problem with lockdowns. Quite apart from the crime of sacrificing innocent people for the benefit of others, there is also the hubris of government assuming they have all the information to predict all the unintended consequences and collateral damage caused by their actions. They never do. It’s impossible. Government claims to be able to predict the number of lives that will be saved when it pulls the switch, but in reality, there are always countless more lives destroyed that nobody foresaw just around the bend. Poverty, hunger, children orphaned by a bankrupted parent’s suicide, educational opportunities destroyed with lifelong consequences, and the list of unintended consequences goes on, and on, and on. The collateral damage caused by government hubris is yet another of the many reasons why the concept of universal human rights was invented to deny government having that much authority over our lives.

But once the government pulls the switch, politicians and bureaucrats must justify their actions to avoid being held accountable for their mistakes. Poverty, suicide, delayed surgeries, mental health issues, and countless other horrors become irrelevant to these state planners so long as government can show it’s fighting to reduce cases “for our safety”, all the while blaming its failures on the behaviours of its citizens and becoming increasingly authoritarian in its enforcement. And so, while the motivations may differ, the consequences of abandoning universal human rights once again lead to suffocating and deadly authoritarianism, a Frankenstein resurrection of precisely the thing that the Universal Declaration of Human Rights was meant to prevent. “Blood and Soil” has been replaced by “Crush the Curve” and “COVID-Zero”, but once again one group of people is being sacrificed for another’s “benefit”.

There is no moral dilemma for the Bystander at the Switch; there is no riddle to be solved. “For your safety” is never an excuse to extinguish someone else’s rights. Not for COVID, nor for anything else. The end never justifies the means. But history shows that there are Nuremburg Trials for those who ignore other people’s universal human rights and especially for those who delude themselves into thinking that they can engineer a more compassionate society by pulling the switch. Let’s not let it come to that.

Are you prepared to allow the government to throw you in front of the train to save someone else? If not, then demand that the government stop doing it to somebody else!