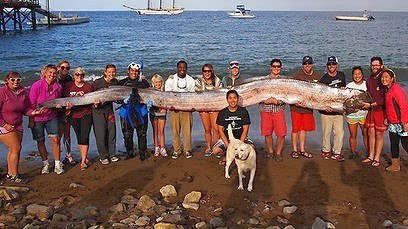 It’s a fun photo for sure – these Oar Fish are huge and a marvel of Nature. However, we must ask ourselves why several of them have come ashore and died in just the last three weeks. Clearly something is not right. Many people say this is an ‘omen’ of Nature – the Oar fish are famous for coming ashore prior to an earthquake – or some other calamity. The mass deaths of fish are being under-reported in the mainstream media – there is a worldwide ‘hush campaign’ in full swing regarding Fukushima – and emails have been released between BRITISH government officials and PR executives at the Japanese TEPCO company who own the stricken nuclear plant (and the Dead Zone) which surrounds it. The British government officials – on the day of the disaster itself – were urging that the situation in Fukushima had to be ”played down’ in the media – otherwise it would harm Her Majesty’s new roll-out of new atomic reactors on British beaches. How sick can you get?

Ordinary Japanese people have been psychologically and physically manipulated – many have been told to return to their houses within the Dead Zone. But the mutant butterflies, and the mass deaths of fish in the Pacific show us the real truth of the matter.

Thyroid problems, birth defects and more mass deaths of fish and animals may happen – and therefore it pays all of us to get better informed. Hawaii was also badly contaminated – as too was the West Coast of the USA. The contamination of the Pacific is not made any better by the fact that there are old nuclear submarines rotting away on our sea beds.

If you see a suspicious dead animal or fish on your local beach then by all means photograph it, post it and make a note of the time and day. Do not touch it. Nature is helping us by showing a ‘pattern’ of mass deaths. TEPCO did not cause the earthquake, nor did they cause the Tsunami, neither did any of the politicians or owners of nuclear reactors cause the devastation – however, it is plain for all of us to see that there has been a massive culture of lying and deception stemming from TEPCO and the Japanese government and this has been the case with the US government and also in Westminster too.

Betonite clay has a reputation for being able to absorb radioactive toxins, and there are medicines for treatment of Thyroid problems. It is time now to have an international medical plan for the free treatment of humans and animals suffering from the contamination and all these nuclear power operators must be compelled to contribute towards a global monthly medical and nature research fund. Instead of lying and being in denial, governments have a responsibility to look after the people and make sure their cancer therapies and other medicines are all paid for by those who advocate and promote this evil messy and downright satanic nuclear nightmarish industry.

One Response to “Nuclear contamination driving fish from the sea”