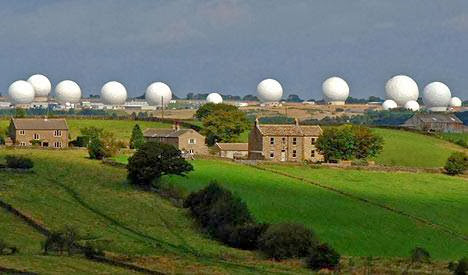 The BBC today threw a smoke bomb into the Edward Snowden revelations – the BBC claim GOOGLE Inc. are ‘outraged’ that the NSA hacked their computers and got all our passwords and search history… Its a smokescreen – very obviously Google assisted the situation.

All our search data, all our passwords and all our audio and video downloads were copied into an NSA super-computer at MENWITH HILL (that’s in Yorkshire, England – pictured) and then analysed at Her Majesty’s GCHQ global spy station. Buckingham Palace gets a ‘summary’ of what GCHQ finds out every day using an app called ‘MUSCULAR’. Google’s Headquarters are in Buckingham Palace Road. Do you see the connection between these dots?

The BBC confirm all of this as true saying today: The latest documents leaked by ex-US intelligence contractor Edward Snowden say millions of records were intercepted directly from GOOGLE servers – the data was sniffed by Her Majesty as it flowed through fibre-optic cables – she got metadata, search histories, our texts, facebook posts, audio and video – these were then sifted and summarised for Buckingham Palace by an NSA programme called Muscular. Muscular is operated with the NSA’s British counterpart, GCHQ.

Could Ed Snowden’s revelations be any clearer? Do you now see why his life and liberty are at danger? Because it PROVES THAT THE BRITS RUN THE SHOW. Mr Baracks Obomber, the White House – it’s all for show – the real deal in town is the MONARCHY – and they murder people who they don’t like. I know – I have made a 2hour film all about this exact subject called MURDERED BY THE MONARCHY. Well done to Mr Snowden for his latest revelations.

Chris Everard Facebook channel
TAP – He has the best pictures on the internet.

9 Responses to “Murdered by the monarchy”