In a common area at the University of Texas at Austin, the Briggo coffee kiosk, covered in fake wood paneling and a touch screen and not much else, takes up about as much space as a pair of phone booths. Its external appearance was designed by award-winning industrial designer Yves Behar, with the intention that it radiate authenticity and what Briggo says is its commitment to making coffee that is the equal of what comes out of any high-end coffee shop. 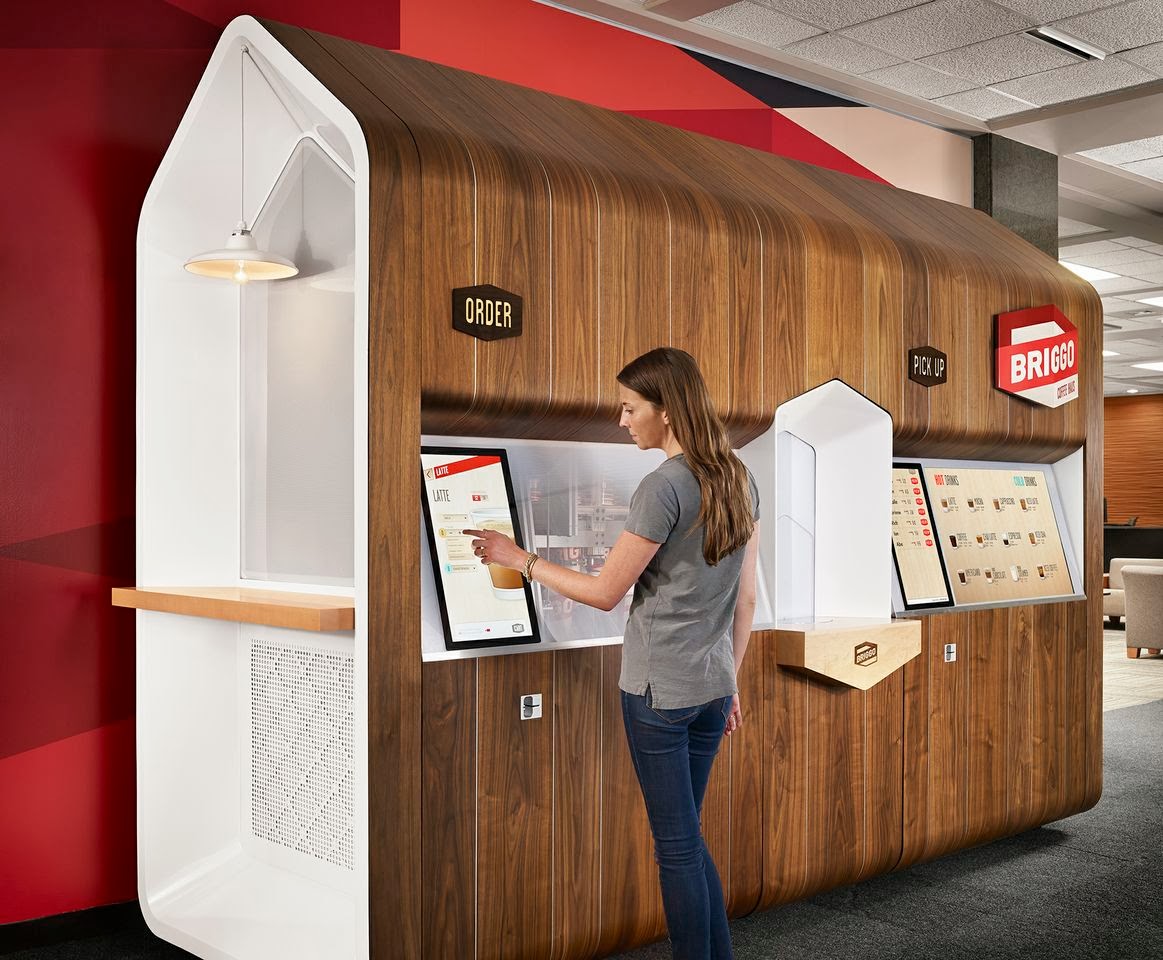 The kiosk at the university is the second version, the one that will be rolling out across the country in locations that are still secret. It needs just 50 square feet (4.6 sq m) of floor space, and it can be dropped anywhere—an airport, a hospital, a company campus, a cafe with tables and chairs and WiFi just like Starbucks. It’s manufactured in Austin.
Inside, protected by stainless steel walls and a thicket of patents, there is a secret, proprietary viscera of pipes, storage vessels, heating instruments, robot arms and 250 or so sensors that together do everything a human barista would do if only she had something like perfect self-knowledge. “How is my milk steamer performing? Am I a half-degree off in my brewing temperature? Is my water pressure consistent? Is there any residue buildup on my brewing chamber that might require me to switch to a backup system?”
The Briggo coffee kiosk knows how to make a perfect coffee because it was “trained” by an award-winning barista, Patrick Pierce. He’s since left the company, but no matter: as in the techno-utopian Singularity, whose adherents believe that some day we will all upload our brains to computers, once a barista’s essence has been captured by Briggo, his human form is just a legacy system.
Besides, baristas, especially the ones at America’s favorite “high end” coffee shop, don’t often stick around long enough to become as good as Pierce. Turnover at Starbucks, which is typical of all demanding retail environments, leads to what Nater calls “variation,” and not the kind that’s exciting—the kind that coffee connoisseurs frown upon, because it means coffee isn’t being extracted from beans in the optimal way.
“What we’ve created is in essence a small food factory that absolutely replicates what a champion barista does,” says Nater. Briggo roasts its own beans—sourced by a pair of coffee supply veterans who between them spent a combined 40 years at Starbucks. “We have calibrated this machine to pull espresso shots to the same specification as an Illy or a Stumptown or an Intelligentsia. We’ve just done it without the human element.”


Hi robot, would you like fries with your burger?

One Response to “Robot coffee tastes better than human”