The Times talks of a new terror threat arriving in London – from Syrians.  Funny that.  The refusal to join the Syrian war by the British Parliament was likely to lead to reprisals from TPTB.  And who better to blame than Syrians for starting a new theatre of operations in the terror game.

The 7/7 London bombing was ‘played’ to ensure Blair won the 2005 election, and to keep Britain in all the wars.   Now we’re getting tired/sick of it all, and voting accordingly, with UKIP surging, and campaigning not to join more overseas adventures.

Cameron will be ordering up the usual treatment for countries that don’t want war from his fiends in Mossad/CIA/MI5 – a false attack to blame on the desired target.  In this case Syria.

The Zionists haven’t gone away or given up.  They tried the usual channels through Parliament.  Got rebuffed, and are now returning to their more usual method to get support for a desired killing spree – bombings. 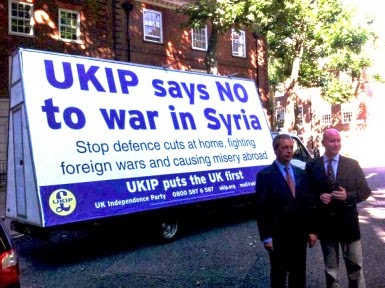 The body bags and coffins are not going to be brought in from the war zones publicly any longer, as this tends to tire peoples’ support for war.  Soldiers will flown home in obscurity.  The public, once war is engaged, can be sent back to sleep.

5 Responses to “New London false flag attack being flagged up”