Hi Tap, The following information may be of interest to some of your readers concerned with geoengineering (chemtrails)

Website… dontspray.us has a video of many engineers involved in the global chemtrailing with David Keith Geoengineer heading a conference where he states…

They do not know what side effects the chemtrails will have as “Nothing serious has been done to research the effects of aluminium, it could be something terrible that has not been looked at” also that “We are free riding on our grand kids” (all his words not mine!) Check video points 7.15 to 10.25

SRMGI…srmgi.org is the website for solar radiation management governance initiative detailing reasons for geoengineering, side effects and all the global participants and stakeholder partners. Bill Gates being a major financial contributor from his personal finances. The Royal Society are just one of the many involved.

There is also in the video a clip from UK house of commons where concern from UK citizens regarding chemtrails have been raised with local politicians. The whole house erupts with laughter from the politicians and it is dismissed as conspiracy theory and a joke although they are fully aware it is real and the reasons for it.

Other Geoengineers involved are..
Ken Caldeira
Alan Robock
Dane Wiggington (Solar Expert)
and many others

We are basically lab rats in their experiments

Chemtrailing resumes after end of US Government shutdown. 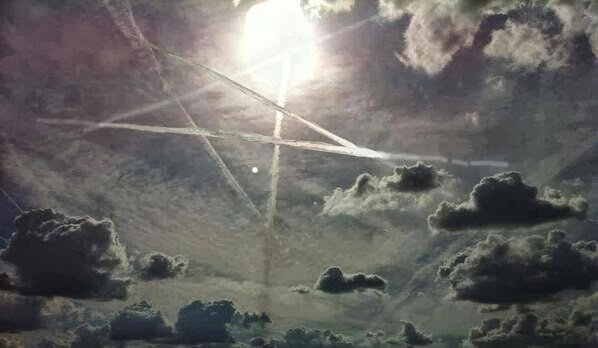 Chemtrailing is back into top gear again after a slight lull due to the US Government shutdown. Money was found to hire private guards to ‘protect’ WW2 war memorials in Washington from WW2 veterans and to ‘close’ the grand canyon but none was forthcoming for the chemtrail spraying. Strange. If ‘global warming’ was really serious then I’m sure they could have found the money to spray the skies during the fake ‘shutdown’.  Obviously chemtrailing has nothing to do with the global warming scam.
The above photo is from South Australia and shows a ‘pentagram’ chemtrail photographed yesterday. Someone is taking the mickey as usual. Laughing in our faces as they spray us.
The rain stopped here for a few minutes this morning  and the sky cleared slightly to show evidence of the spraying.

Anonymous said…
Chemtrails have many functions – all hostile to us. Think of it as warfare. 1. weather modification 2. atmospheric conductivity for HAARP transmissions and microwave weapons 3. inducing disease. 4. causing failure of crops etc. The ptb know about it, facilitate it and block mainstream reporting. How do they escape the health effects? They have high level medical facilities which are unavailable to the majority – even under expensive private health care. Example: sound wave treatment which neutralise pathogens and blood cleansing treatments.
The Tap Blog is a collective of like-minded researchers and writers who’ve joined forces to distribute information and voice opinions avoided by the world’s media.