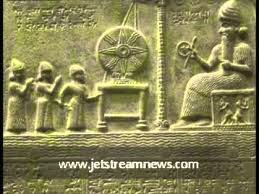 Sound is energy.  In a vacuum it travels faster than light.

While this is fascinating stuff, and gives another dimension to Zechariah Sitchin’s work, you still feel that there might be something else behind the Annunaki revelations that is still being kept from view.  Child seizure for example.  This is a story that needs to be followed, but all the usual warnings should be given.  Each of us has to form our own truth in the end of the day.

I would prefer it if Michael Tellinger was not pushing for a new political paradigm and just stuck to getting the historical record corrected, something where he has a lot to offer.  This presentation has been suggested by commenters as suitable for The Tap, so here it is.  It’s well worth the time to watch, and has a lot of new information, as well as going over some older Sitchin material.  You wonder, has Michael cut a deal to not reveal part of what he knows about the real nature of the Annunaki, as many suspect was the case with Sitchin?

By forming a political party, he is creating a structure which can be penetrated, and his message corrupted and misrepresented.  His naivety and creativity are charming and make him a great innovator, thinker and communicator.  Getting into politics could be a wrong move.  Let’s hope not.

His slogan ‘money doesn’t exist’ is a wonderful basis to work from.   The evils of the money system are undoubtedly in need of challenge.  Could we design a world which didn’t use something akin to money?

His description of how he is challenging the banks in court is fascinating.   The banks are in breach of contract every time they lend, as they are lending money they don’t possess, and they don’t disclose this.

It’s quite a thought.  The whole debt system is based on something that doesn’t exist, and continual illegality.  As soon as one judge makes a judgement that lenders cannot enforce their loans, the banking system is over.  All debts will be cancelled.

I like the sound of it, but then what?

Money should not be got rid of, which would make trade impossible except via barter, but managed with a different intention, that’s all.  It easily could be.  But the political levers would need to be got hold of.  Michael is in danger of becoming another ‘let’s wreck the system’ patsy like Russell Brand.  Is he really so naive, or has he been set up to deliver another wrong trail for people to follow?

COMMENT –   The Irish seem to be the leaders in challenging the activities of the banks. They are offering advice on how to have mortgages declared invalid, and disrupting the auctions of foreclosed homes. The day when the first judge declares bank loans to be fraudulent may not be far off. Check out the video.

3 Responses to “Michael Tellinger – recommended, but with a warning”