This is beginning to become a regular occurence, and McCain has the arrogance to say he’ll run for another term as Senator in 2016. But it’s worse than that… The absent-minded Senator was ambushed by an intelligent constituent…

“I’ve been told for 12 years al-Qaeda is my enemy Sir, why is my money going to al-Qaeda in Syria?”
“I am not some fool standing here in front of you Sir, and I know that our money and weaponry, and by the way I have friends and family in the Jordanian Army and I know what our troops are doing there, and any man who supports al-Qaeda, I don’t care if he is the president of the United States or a Senator from the great state of Arizona”.

McCain went on to berate his constituent, displaying the condescending attitude which has become McCain’s hallmark in recent years.

McCain did one worse this time, however – he accused the concerned Phoenix resident of lying by denying the man’s claim. Of course the Phoenix resident was 100% correct, supported by the US government’s own admission on September 11, 2013, that the CIA has been running guns into Syria admittedly since the summer. As the Washington Post reported:

“The CIA has begun delivering weapons to rebels in Syria, ending months of delay in lethal aid that had been promised by the Obama administration, according to U.S. officials and Syrian figures.”

As 21WIRE revealed last month, in addition to John McCain, other US politicians have also pledged their loyalty to rebel commander Gen. Salim Idriss in Syria. Sen. Bob Corker (R-Tenn.) gushed that he felt embarrassed when he met with Syrians in the field just three weeks ago. “It was humiliating (…)… The president had announced that we would be providing lethal aid, and not a drop of it had begun. They were very short on ammunition, and the weapons had not begun to flow.”

It’s not only the guns which the US taxpayer is picking up the bill for in Syria. US military personnel have been deployed in neighboring Jordan in order to prep Islamic fighters before they are deployed as part of terrorist gangs in Syria.

John McCain crossed into Syria to visit the rebel militant leader General Idris on May 27,2013. Opposition General Idris has under his command, a number of militant terrorist cells who have been engaged in wanton violence, including the slaughter of hundreds of innocent Kurdish villagers in Northern Syria.  Here is McCain himself, posing for a photo with known terrorists in Syria: 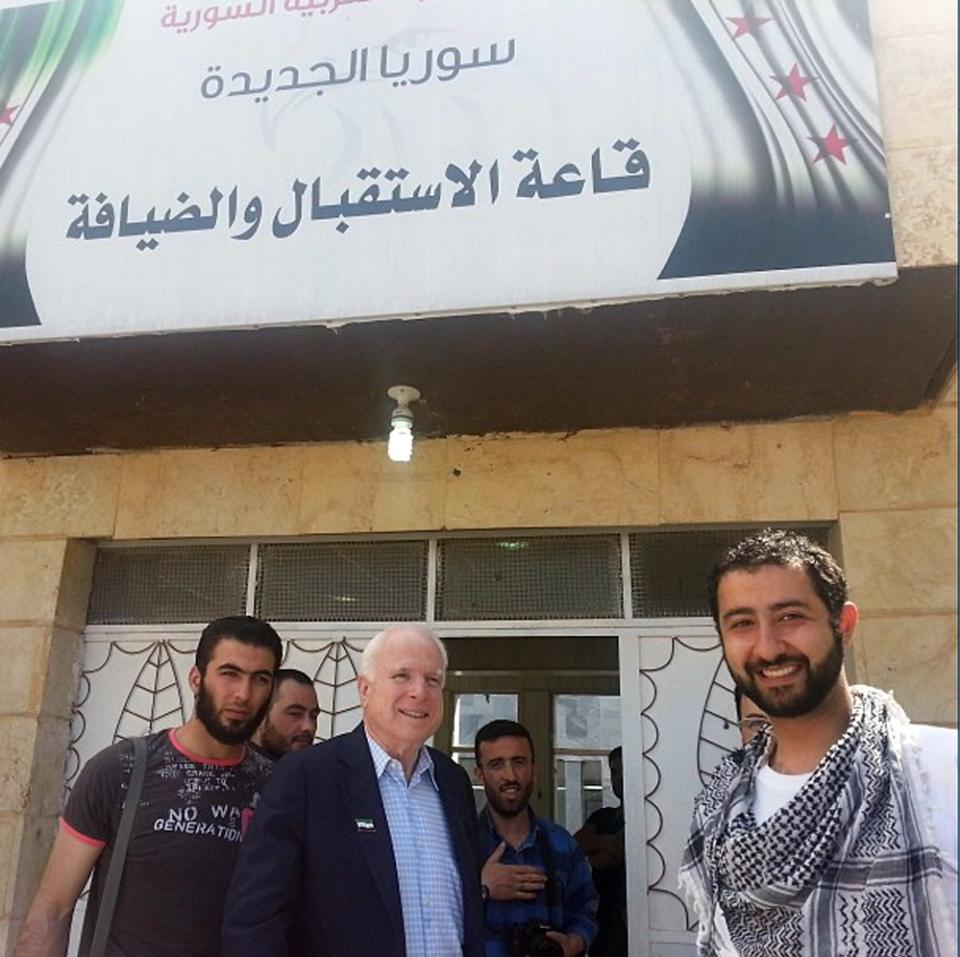 To prove that Washington is both colluding and running PR cover for the rogue Senator, a State Department official issued a statement afterward, admitting they were aware of McCain clandestine visit into Syria, but referred further any questions to McCain’s office. That’s a cover-up.

In the photo above, McCain is joined by at least one known criminals, kidnapper Mohamed Nour (center, behind McCain’s left shoulder) from terrorist group “Northern Storm”, confirmed by Beirut’s The Daily Star newspaper as being part of a group who kidnapped 11 Shia muslims in 2012.

Who paid for McCain’s illegal trip to Syria? Answer: the US taxpayer.