Chinese authorities have captured the suspects in a fatal car crash on Beijing’s Tiananmen Square, state media said Wednesday, describing the incident as a “terrorist attack” for the first time.
“The arrests were made 10 hours after the incident, which has now been identified as a terrorist attack”, broadcaster CCTV said on its verified English-language microblog account.
http://www.rawstory.com/rs/2013/10/30/china-blames-tiananmen-square-car-crash-on-arrested-terrorist-suspects/ 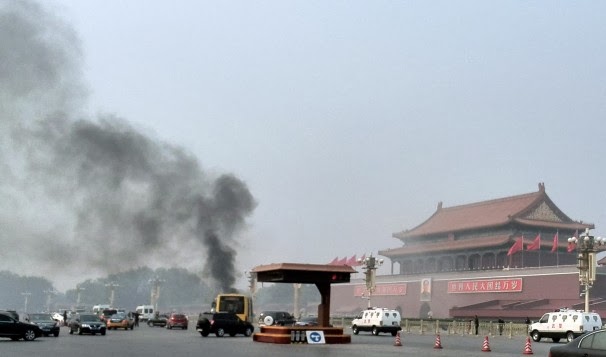 BEIJING — An SUV plowed into a crowd in Beijing’s iconic Tiananmen Square on Monday and then crashed and burst into flames, killing two pedestrians and the three occupants of the vehicle and injuring 38 others, police and state media said.

Police flooded the historic square, which is perhaps the country’s most sensitive and closely guarded public venue — as well as a major destination for domestic and foreign tourists. It was the scene of a bloody crackdown on pro-democracy protests in 1989.
The cause or possible motive for the crash remained unclear. One foreign tourist interviewed by the Reuters news agency , who declined to give her name, reported hearing an explosion before seeing the smoke. Images posted on social media sites showed the vehicle engulfed in flames, and a thick plume of black smoke rising into the air.
Hundreds of posts about the incident surfaced on social media sites in China, but were quickly deleted by censors, according toFreeWeibo.com, a Web site that tracks such activity. Among the deleted posts were some that showed images of the burning vehicle and others that suggested the crash might have been a case of self-immolation, a widely used form of protest here.
Internet searches for “Tiananmen car accident” also were blocked. China’s state-owned news agency Xinhua carried a brief report of the crash, but reports and microblog posts by other Chinese media outlets were deleted. The incident was not mentioned on state television’s Chinese-language evening news.
The SUV burst through the security barriers lining the square before slamming into one of the stone bridges leading to the former imperial palace known as the Forbidden City, Beijing police said on their official microblog. The vehicle ignited not far from an imposing portrait of Mao Zedong, communist China’s founding father, which hangs from the ancient red-painted Tiananmen Gate.
http://www.washingtonpost.com/world/china-censors-busy-as-jeep-plows-into-crowd-in-tiananmen-square-killing-five/2013/10/28/768f7b88-3fc2-11e3-b028-de922d7a3f47_story.html
The Tap Blog is a collective of like-minded researchers and writers who’ve joined forces to distribute information and voice opinions avoided by the world’s media.

2 Responses to “China censors news of an SUV plowing into a crowd in Tiananmen Square, killing five”