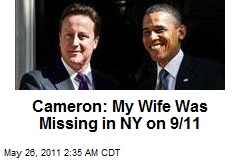 TAP –  it all seems very unlikely.

Click the link.  Wives of politicians are selected for them.  Usually they have lesbian tendencies and only accompany their husbands on public engagements, according to Chris Spivey’s long piece on the Camerons.

According to the MSM, Sam Cam flew into New York City On September the 10th 2001 with a view to opening a new branch of Smythsons in Manhattan. However, according to the Abel Danger website, Sammy Cammy had an ulterior motive for being in the USA:

United States Marine Field McConnell has linked Samantha Cameron’s trip on 9/10 to New York to the covert transfer of Keynesian spread-bet PKI keys which allowed the Naudet Brothers to position their camera crews to record impact times of drones hitting the Twin Towers and demolition times of buildings which generated scrap-steel sales for master servicer Wells Fargo.McConnell notes that both David Cameron and Maynard Keynes spent time at Treasury learning how to operate the spread bet scam.

David Cameron: wife Samantha was missing in New York on 9/11

Samantha Cameron was in New York on the day of the 9/11 terror attacks and could not be contacted by her family for five hours, the Prime Minister disclosed.

8 Responses to “Who are the Camerons? really”