US: The Indispensable (Bombing) Nation 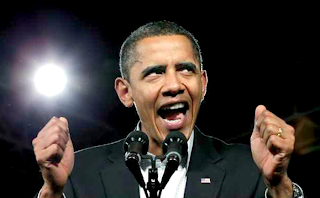 Yes We Scan. Yes We Drone. And Yes We

Bomb. The White House’s propaganda blitzkrieg
to sell the Tomahawking of Syria to the US
Congress is already reaching pre-bombing
maximum spin – gleefully reproduced by US
corporate media.

And yes, all parallels to Iraq 2.0 duly came to fruition when US Secretary of State John Kerry pontificated that Bashar al-Assad “now joins the list of Adolf Hitler and Saddam Hussein” as an

evil monster. Why is Cambodia’s Pol Pot never mentioned? Oh yes, because the US supported
him.

Every single tumbleweed in the Nevada desert knows who’s itching for war on Syria; vast

sectors of the industrial-military complex; Israel; the House of Saud; the “socialist” Francois
Hollande in France, who has wet dreams with Sykes-Picot. Virtually nobody is lobbying
Congress NOT to go to war.

And all the frantic war lobbying may even be superfluous; Nobel Peace Prize winner and

prospective bomber Barack Obama has already implied – via hardcore hedging of the “I have
decided that the United States should take military action” kind – that he’s bent on attacking
Syria no matter what Congress says.

Obama’s self-inflicted “red line” is a mutant virus; from “a shot across the bow” it morphed into a

“slap on the wrist” and now seems to be “I’m the Bomb Decider”. Speculation about his real
motives is idle. His Hail Mary pass of resorting to an extremely unpopular Congress packed
with certified morons may be a cry for help (save me from my stupid “red line”); or – considering
the humanitarian imperialists of the Susan Rice kind who surround him – he’s hell bent on
entering another war for the American Israel Public Affairs Committee (AIPAC) and the House of
Saud lobby under the cover of “moral high ground”. Part of the spin is that “Israel must be
protected”. But the fact is Israel is already over-protected by an AIPAC remote-controlled United
States Congress. [1]

What about the evidence?
The former “cheese-eating surrender monkeys” are doing their part, enthusiastically supporting

the White House “evidence” with a dodgy report of their own, largely based on YouTube intel. [2]

by AP correspondent Dale Gavlak on the spot, in Ghouta, Damascus, with anti-Assad residents
stressing that “certain rebels received chemical weapons via the Saudi intelligence chief,
Prince Bandar bin Sultan, and were responsible for carrying out the gas attack”.

Then there’s the fact that Syrian Army commandos, on August 24, raiding “rebel” tunnels in the

Damascus suburb of Jobar, seized a warehouse crammed with chemicals required for mixing
“kitchen sarin”. The commando was hit by some form of nerve agent and sent samples for
analysis in Russia. This evidence certainly is part of President Vladimir Putin’s assessment of
the White House claims as totally unconvincing.

the attack was “aimed at framing Assad”. And in case the UN inspectors found the “rebels” did
it, “everybody would forget it”. The clincher; “Are they are going to punish the Emir of Qatar or
the King of Saudi Arabia, or Mr Erdogan of Turkey?”

So, in a nutshell, no matter how it happened, the locals in Ghouta said Jabhat al-Nusra did it;

and Syrian Kurds believe this was a false flag to frame Damascus.

By now, any decent lawyer would be asking cui bono? What would be Assad’s motive – to cross

the “red line” and launch a chemical weapons attack on the day UN inspectors arrive in
Damascus, just 15 kilometers away from their hotel?

armed with box cutters hijacking passenger jets and turning them into missiles smack in the
middle of the most protected airspace on the planet, on behalf of an evil transnational
organization.

attack with DIY rockets – a scenario I first outlined even before Gavlak’s report. [4] Here is a
good round-up of the “rebels” dabbling with chemical weapons. Additionally, in late May,
Turkish security forces had already found sarin gas held by hardcore Jabhat al-Nusra jihadis.

So why not ask Bandar Bush?
We need to keep coming back over and over again to that fateful meeting in Moscow barely

four weeks ago between Putin and Bandar Bush. [5]

Bandar was brazen enough to tell Putin he would “protect” the 2014 Winter Olympics in Sochi.

He was brazen enough to say he controls all Chechens jihadis from the Caucasus to Syria. All
they needed was a Saudi green light to go crazy in Russia’s underbelly.

He even telegraphed his next move; “There is no escape from the military option, because it is

the only currently available choice given that the political settlement ended in stalemate. We
believe that the Geneva II Conference will be very difficult in light of this raging situation.”

That’s a monster understatement – because the Saudis never wanted Geneva II in the first place. Under the House of Saud’s ultra-sectarian agenda of fomenting the Sunni-Shi’ite divide

everywhere, the only thing that matters is to break the alliance between Iran, Syria and
Hezbollah by all means necessary.

Compared to this absurdity, Muqtada al-Sadr’s reaction in Iraq stands as the voice of reason.

Muqtada supports the “rebels” in Syria – unlike most Shi’ites in Iraq; in fact he supports the
non-armed opposition, stressing the best solution is free and fair elections. He rejects
sectarianism – as fomented by the House of Saud. And as he knows what an American military
occupation is all about, he also totally rejects any US bombing.

The Bandar Bush-AIPAC strategic alliance will take no prisoners to get its war. In Israel, Obama

is predictably being scorned for his “betrayal and cowardice” in the face of “evil”. The Israeli
PR avalanche on congress centers on the threat of a unilateral strike on Iran if the US
government does not attack Syria. As a matter of fact congress would gleefully vote for both.
Their collective IQ may be sub-moronic, but some may be led to conclude that the only way to
“punish” the Assad government is to have the US doing the heavy work as the Air Force for the
myriad “rebels” and of course jihadis – in the way the Northern Alliance in Afghanistan, the
Kurdish peshmerga in Iraq and the anti-Gaddafi mercenaries in Libya duly profited.

So here, in a nutshell, we have the indispensable nation that drenched North Vietnam with

napalm and agent orange, showered Fallujah with white phosphorus and large swathes of Iraq
with depleted uranium getting ready to unleash a “limited”, “kinetic” whatever against a country
that has not attacked it, or any US allies, and everything based on extremely dodgy evidence
and taking the “moral high-ground”.

landing on some deserted military barracks should rent a condo in Alice in Wonderland. The
draft already circulating in Capitol Hill is positively scary. [7]

And even if this turns out to be a “limited”, “kinetic” whatever, it will only perpetuate the chaos.