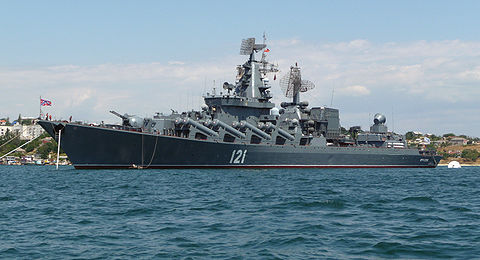 The cruiser Moskva with multiple rows of anti-ship missiles, based at Sevastopol, now in the Med.  Do Americans really want a war with Russia at sea?

Russia is sending three more ships to the eastern Mediterranean to bolster its fleet there as a U.S. Senate panel will consider President Barack Obama’s request for authority to conduct a military strike on Syria.

Russia is sending two destroyers, including the Nastoichivy, the flagship of the Baltic Fleet, and the Moskva missile cruiser to the region, Interfax reported today, citing an unidentified Navy official. That follows last week’s dispatch of a reconnaissance ship to the eastern Mediterranean, four days after the deployment of an anti-submarine ship and a missile cruiser to the area, which were reported by Interfax. Syria hosts Russia’s only military facility outside the former Soviet Union, at the port of Tartus.
The buildup is raising the stakes as the U.S. prepares for possible action against Syria, sending warships and submarines to the east Mediterranean armed with Tomahawk cruise missiles. The Senate Foreign Relations Committee will vote today on a resolution that supports the use of force by the U.S. military.
“Russia is sending a strong signal that the conflict surrounding Syria touches on its interests, to ensure that international law is upheld and there is no bypassing the UN Security Council,” Ivan Safranchuk, deputy director of the Foreign Ministry’s Institute of Contemporary International Studies in Moscow, said by phone.

Russia is temporarily bolstering its naval presence in the region to improve its surveillance capability over U.S. ships and submarines deployed in the area and to ensure security for Russian citizens residing in Syria, according to a Russian official who asked not to be named, citing government policy.
President Vladimir Putin said today that congressional approval would “legitimize aggression,” adding that only the United Nations Security Council can endorse the strikes. Putin, whose country wields a veto as a permanent member of the Security Council, said he needs proof that the Syrian government used chemical weapons to support a U.S.-led strike.
Russia, which has embarked this decade on the largest rearmament program since the 1991 collapse of the Soviet Union, is projecting naval power a day after its early-warning radar station detected what it misidentified as a launch of two ballistic missiles in the Mediterranean. Israel later said it carried out a joint missile test with the U.S.
http://www.bloomberg.com/news/2013-09-04/russia-boosts-mediterranean-flotilla-as-u-s-weighs-syria-strike.html

We have our plans if US launches war on Syria, Putin says

Russian President Vladimir Putin says Moscow has its own plans to deal with a possible US military offensive against Syria.

Putin made the remarks on Tuesday night at his country residence outside Moscow during an interview with The Associated Press and Russia’s state Channel 1 television published on Wednesday.

“We have our own ideas about what we would do and how we would do it if the situation develops toward the use of force or otherwise,” he said. “We have our plans, but it’s too early to talk about them.”

The war rhetoric against Syria intensified after foreign-backed opposition forces accused the government of President Bashar al-Assad of launching a chemical attack on militant strongholds in the suburbs of Damascus on August 21.

Damascus has vehemently denied the accusations, saying the chemical attack was carried out by the militants themselves as a false-flag operation.

On August 31, US President Barack Obama said he has decided that Washington must take military action against the Syrian government, which would mean a unilateral military strike without a UN mandate.

Obama said that despite having made up his mind, he will take the case to US Congress. But he added that he is prepared to order military action against the Syrian government at any time.

The US president once again held the Syrian government responsible for the chemical weapons attack near Damascus.

On August 29, a meeting of the Security Council’s permanent members ended without reaching an agreement on Syria.

The Western members of the council have been pushing for a resolution on the use of force while Russia and China are strongly opposed to any attack on Syria.