Of course we welcome and understand why people

totally unsustainable.  Then this happens. 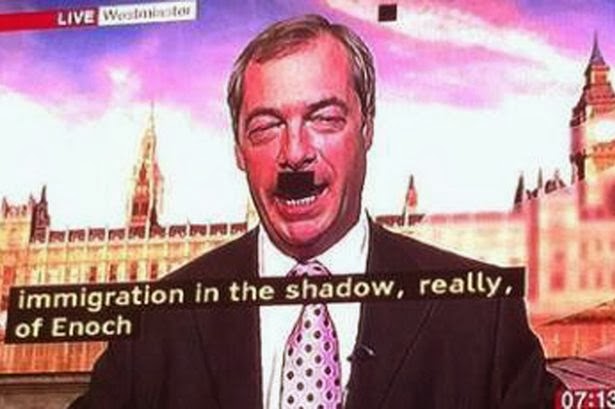 A poorly-timed pixel fault occurred on the BBC big screen in Media City in Salford as the Ukip leader appeared on BBC Breakfast this morning.

TAP – the only way it would be an error would be that they’re using subliminal imaging to make Farage seem like a NAZI on television.  Tell – lie – vision.  This time the image didn’t appear for a subconscious only brief appearance, but was left on too long.  They use subliminal techniques all the time.  That’s why you should never watch TV.  You never know what someone’s putting into your mind.

BBC
A technical glitch left Nigel Farage appearing to sport a Hitler-style moustache when he appeared on the BBC today.
The incident came just hours after the UKIP leader was forced to deny singing Hitler Youth songs as a schoolboy.
Mr Farage was talking about an immigration crackdown when the large black pixel appeared over his upper lip on a big screen at Media City in Salford.
He was discussing Enoch Powell after the revelations that his teachers at Dulwich College saw him as a “racist” and a “fascist”.
Mr Farage admits saying things that might have been seen as racist but insisted he is not prejudiced or an extremist.
The picture was originally tweeted by BBC TV Sportscaster Olly Foster, before he deleted the post saying: “Apologies for my previous tweet.
“An error of judgement on my behalf.”
The BBC said in a statement “The big screen is owned by MediaCity UK, not the BBC.
“The fault has been reported to them and they are working to rectify it as soon as possible.”
* See highlights of Nigel Farage’s conference speech below.

Check out all the latest News, Sport & Celeb gossip at Mirror.co.uk http://www.mirror.co.uk/news/uk-news/nigel-farage-pictured-hitler-moustache-2287966#ixzz2fUi70Ipf