I do not like Infowars.com much any more, but they recently produced a report about nuclear weapons being sent to the East Coast for shipment elsewhere and I believe it is absolutely real.
Nuclear weapons do not get shipped without a good reason. Shipping nukes is risky business, and the current nuke move involved weapons which have sat idle in storage for 30 years. It all happened in secret, with the people sending them out under orders to do so without a signature. They don’t know where they are ultimately going to, but one of the truck drivers said he was heading to the East Coast. 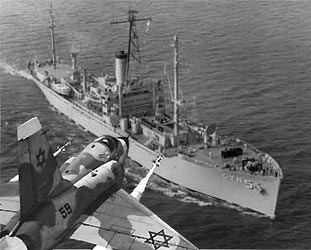 This was originally reported as it was, but now even PressTV is backtracking. Israel “test fired” two missiles from the central Mediterranean and sent them on a course which would have crossed the location where the American ships are currently stationed. One of the missiles triggered the incoming threat detection on one of the U.S. destroyers and was shot down. There is no word of what happened to the second missile, but from the chatter it could be guessed that it malfunctioned en route to the U.S. ships.

Though Israel has managed to white wash this right down the drain, calling it a “test”, I am going to call it like it really was. There is no doubt this was an aggressive move, because if it was not aggressive it would not have been en route to an American target, thus triggering the threat detection on one of the ships. Had this been a legitimate test, the ship would have been warned and would not have needed to rely on countermeasures to prevent a strike.

There is no doubt Israel wanted another U.S.S. liberty style false flag attack to blame on Assad and perhaps provide a reason for the U.S. to use those recently shipped nukes

Something ugly is on the horizon. I can’t say what it is, but if the nukes are on the move, something very very ugly is coming, and Israel is working over time to make it happen. Nukes on the move, without a signature. Hmmmmmmmmm . . . . . Just perfect for an enormous nuclear false flag bombing run god knows where, or a surprise nuke attack on Iran. I doubt Iran though, because Turkey has already been equipped with over 50 U.S. nuclear warheads including the aircraft to deliver them, and has agreed to do so when asked. And when it comes to Iran, Israel has 500 more they will gladly donate to the weather. This was taken care of decades ago, there is nothing new to the story of Turkey agreeing to do the dirty nuclear work of destroying Iran for America, or Israel being capable of doing it many times over as well.

I have a little prediction here. Russia and China are not stupid, and neither is the American public. Too many people know what is going on now, and it really does not matter where those now secretly mobile American nukes go off, once the nuclear game has started out in the open, even if it begins in Chicago, the final nuclear target will be Israel. ALL the nuclear nations can maintain a viable nuclear deterrent after being struck and Israel will not be forgiven for bringing catastrophe to the world. People are now too wise and I don’t believe the ziopress propaganda will be able to spare the perpetrators.

Here is the infowars nuke report. This was in the rotation for only 20 hours before being pulled. If it vanishes I have it captured.

Israel says it carried out a “joint” US missile launch in the Mediterranean, having earlier claimed ignorance. Russian radars detected two ballistic rockets fired in the region on Tuesday, sparking widespread speculation over who was behind the launch
A spokesperson for the Israeli army confirmed that a launch of a missile had been carried out 9:15am local time (06:15 GMT), adding that US forces in the Mediterranean had been given prior warning of the drill.

A fighter jet launched an Ankor-type (“Sparrow”) missile as part of a drill to test the Israeli missile defense system. However, earlier, when the Russian government announced it had detected the firing of “two ballistic objects” in the area, Israel insisted it had no “information on this issue yet.”

Despite Israeli claimed of a “joint US” missile launch, the American Navy maintained that no rockets were launched by US forces in the region.

“No missiles were fired from US ships in the Mediterranean,” said the spokesman, who made no further comment on the matter.

Other members of the international community were quick to follow suit with France, UK and Italy denying any knowledge of the test launch. NATO said it was investigating the incident.

The Pentagon later admitted that the Israeli missile test in the Mediterranean was carried out “with technical support of the US Defense Department.”
The test was also “pre-planned,” according to the US Defense Department spokesman George Little quoted by Itar-Tass.
The Israeli Defense Ministry confirmed a US defense agency took part in a “successful flight test of the new version of the Sparrow target missile” in an e-mail statement to RT Arabic.

5 Responses to “Jim Stone – Israel fired on the US navy”