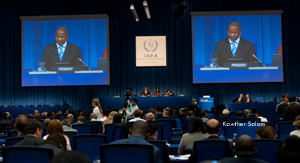 On Friday September 20 2013, the last day of sessions of this year’s IAEA 57th, General Conference in Vienna, the delegates of the Member States will vote on a draft resolution submitted by the Arab States regarding the Israeli nuclear capabilities in the Middle East and which is being sponsored by UAE, Bahrain, Tunisia, Algeria, Saudi Arabia, Sudan, Syria, Iraq, Oman, Qatar, Kuwait, Lebanon, Libya, Morocco, Mauritania, Yemen and others. The Arab Republic of Egypt has also added its signature to the draft on the application of safeguards of the IAEA in the Middle East.
In past years, the Arab states have repeatedly sponsored resolutions on the Israeli Nuclear Capabilities (INC), calling on Israel to join the nuclear Non-proliferation Treaty (NPT) and place all its nuclear facilities under IAEA safeguards. In 2009, a draft resolution presented at the IAEA General Assembly in that year read (quotes) “expresses concern about the Israeli nuclear capabilities,” and “calls upon Israel to accede to the NPT (nuclear Nonproliferation Treaty) and place all its nuclear facilities under comprehensive IAEA safeguards.”

Since then, western countries including USA, Canada, EU and several smaller countries have colluded at subsequent IAEA General Conferences to thwart the draft resolutions submitted by the Arab states each year. It can be safely assumed that the USA and a small coterie of western countries will play the same game tomorrow morning, and the media will anew celebrate the thwarting of this year’s draft resolution as a “big achievement” in the favour of israel nuclear weapons.

Israel has nuclear weapons which are considered a grave threat by the Arab States, not only to the Middle East but also the rest of the world. Israel has developed nuclear capabilities but does not publicly acknowledge it as a matter of policy. The IAEA applies safeguards in Israel pursuant to an INFCIRC/66 – type safeguards agreement which is implemented at the Soreq Nuclear Research Centre. In the Al-Nakab desert is the “Negev” Nuclear Research Center also known as “Dimona Reactor”, which is not under IAEA safeguards and is widely thought to be the main site of development of nuclear weapons in Israel.
A part of Israel’s nuclear program that is less well known to the outside world is that, in the context of its genocidal policies towards Palestinians, Israel buries nuclear waste in the Palestinian territories near population centers. The radioactivity of this waste contaminates aquifers and agricultural fields used for food crops. One known site where nuclear waste is buried is close to the so-called armistice line near Yatta in the southern West Bank. This is confirmed by high rates of cancer in the Palestinian towns of the West Bank as well in towns near the “Dimona reactor”.
The very high rates of cancer which afflict the populations of Yatta, Al-Samu’a and al- Daharieh towns close to the “Dimona reactor” have no other explanation, as the traditional diet of Palestinians hinders cancer rather than promoting it, and the ailment was virtually unknown before the Israeli occupation.
Since the past five years Israel still holds the equipment of the IAEA which were sent to the Palestinian Authority in the field of technical cooperation. The IAEA sent the (PA) this equipment as part of a technical exchange program, but Israel did not deliver all of them them. The equipment consists of devices used to detect radiation pollution.