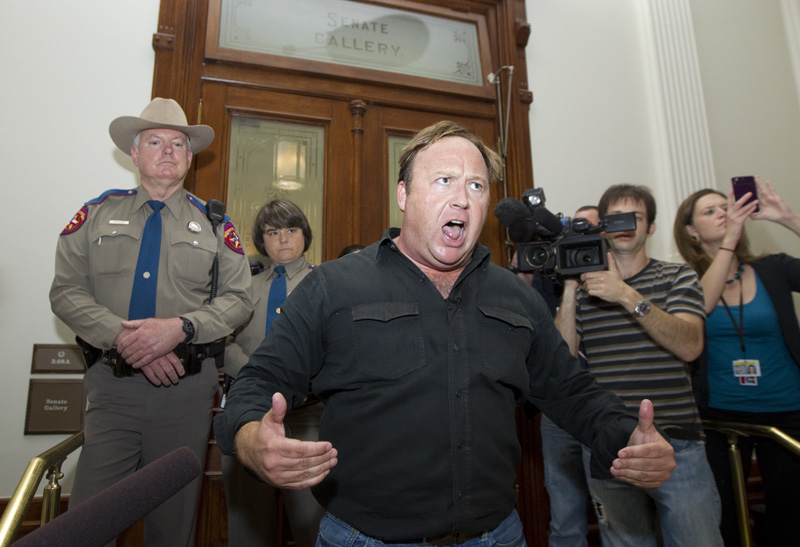 On March 24 Alex Jones got Jeff Rense fired from the GCN network when he mirrored some article from Nathanael Kapner that suggested that Alex Jones is a Zionist Shill. Nathanael Kapner says he was born a Jew but converted to Christianity. For people who know about Crypto Judaism it should ring at least an alarm bell. Kapner runs a website calledwww.realjewnews.com. But the major reason for the high traffic in his website turns out to be Jeff Rense, who is heavily promoting Kapner. Rense mixes high quality insider materials/scientific content with nonsense on UFOs, aliens and miracle cures.

The purpose is to make the good information appear as credible as the absurd.

When you realize that both the ADL and Alex Jones are covering up Jewish crimes, you should wonder if this “hit piece” is a trick to give Jones some publicity and counteract the accusations that he’s a Zionist agent.

When two criminals cover up the same crimes, you have to wonder if they’re working together, even if they criticize one another.

From Link in below’s submission –

Novels are fiction, but they write sometimes a dangerous truth. Many former government officials write their experience down, and classify it as fiction, like chief counter-terrorism adviser Richard Clarke in his book “The Scorpion’s Gate”. Clarke told: “Sometimes you can tell more truth through fiction”. By classify books as fiction government official prevent that their books are checked an delayed by the secret service. This is also the reason that fictional books sometimes are banned by governments for political reasons. In the early 1840s Benjamin Disraeli had become close friends with Lord Rothschild. In 1844 he wrote a political novel Coningsby. One of the characters in this novel was Sidonia, and was based on Lord Rothschild. Sidonia said “Governments do not govern, but merely control the machinery of government, being themselves controlled by the hidden hand”. Further he wrote: “The world is governed by very different personages from what is imagined by those who are not behind the scenes”. Benjamin Disraeli himself was Prime Minister in the UK in 1868 and between 1874-1880.

I care not what puppet is placed upon the throne of England to rule the Empire on which the sun never sets. The man who controls Britain’s money supply controls the British Empire, and I control the British money supply.”
—Nathan Mayer Rothschild—

Also many Rothschild family members have made similar statements as Amschel Mayer Rothschild: “Permit me to issue and control the money of a nation, and I care not who makes its laws”. But if governments do not really govern, who does?
What sense the statements from Vladimir Putin and his advisor Tatyana Koryagina make? Was there a secret group behind the communistic conspiracy? What has this secret group to do with the 911 attacks? Was this big event their first crime or have they already experience?
In 1903 in the Russian daily newspaper Знамя (Znamya means “The Banner”) a serial The Protocols of the Elders of Zion was published. Those Protocols mention “Goyim are mentally inferior to Jews and can’t run their nations properly.  For their sake and ours, we need to abolish their governments and replace them with a single government.  This will take a long time and involve much bloodshed, but it’s for a good cause.  Here’s what we’ll need to do:
http://history.vogels.org/Chapter_03.html
Kind regards,
Gordon.

Hi Tap, Food for Thought Gordon: Alex Jones is a Jesuit Coadjutor, remember I told you Religious Background, or Ethnicity matters not, I am also of The opinion he could be a SMOM, as I remember mentioning this before, having seen him featured, with other Celebrity SMOMS at various Jesuit Institutions.

WILLIAM COOPER EXPOSED JONES AS A LIAR, FRAUD & ‘BS ARTIST’ ABOUT SEVEN WEEKS AFTER EXPOSING JONES AS A LIAR AND A FRAUD on his highly-regarded national patriot radio show (Watch & Listen HERE), William Cooper (author of the alternative news best-seller – ‘Behold A Pale Horse’ – was shot to death at his home in Eager, Arizona on November 5, 2001.

Did you know the founder of Zionism encouraged anti-Semitism as a way to manipulate us?
“It is essential that the sufferings of Jews become worse this will assist in realization of our plans. I have an excellent idea. I shall induce anti-semites to liquidate Jewish wealth. The anti-semites will assist us thereby in that they will strengthen the persecution and oppression of Jews. The anti-semites shall be our best friends”

Theodor Herzl, Founder of Zionism in 1897
Theodore Herzl JESUIT traveled to Rome in late January 1904.
it was revealed a 100+ year JESUIT plan, planning ww1 ww2 ww3″ and that includes CREATING and using ZIONISM as PUPPETS to take the fall in ww3, like they wrote in the minutes and used Hitler as a Puppet in ww2 to make Israel, “The movement was eventually successful in establishing Israel on May 14, 1948 “Power to draw lines on a map – Nation Creation”

The JESUITS ARE THE CONTROLLERS,(THE BLACK POPE BEING THE ULTIMATE AUTHORITY OF THE ORDER), FOR A SMALL NUMBER OF RULING HIGHER ELITE.

THE JEWS ARE SUBSERVIENT TO THE JESUITS,TOGETHER WITH THOSE OF MANY OTHER BACKGROUNDS, WHO’S FIRST ALLEGIANCE IS TO THE POPE. THE DECEPTION OF THE POWER OF THE JESUITS IS EXTREMELY SUCCESSFUL, AS THEY USE JEWS TO FRONT ALL OPERATIONS.

VERY FEW IT WOULD APPEAR ARE ABLE TO SEE THROUGH THE SMOKE & MIRRORS DECEPTION. ref IMF, Committee of Rome, Bilderbergers, Even The THIRD REICH, HIMMLER, was equivalent to A Jesuit General when The Concordat had been setup, BORMANN, HITLER’S Controller was under HIMMLER. This is another interesting Story & was a CRUSADE To ELIMINATE, ORTHODOX JEWS & CHRISTIANS.

The first Extermination Programme by Gassing using Zyclon ‘B’, produced by The Jesuit Controlled I.G.Farben was carried out on Hundreds of Thousands of RUSSIAN PRISONERS OF WAR, but Jesuits were on Both Sides, The Jesuit Coadjutor EISENHOWER destroyed evidence of many of these Camps, & he was later responsible for the deaths by starvation of millions of German Prisoners of War.

The SMOMS are the ones who wield the real Power,under the Authority of The Jesuit General. THE VATICAN’S RENT – A CROWD, Muslim Brotherhood, morphed Al-Qaeda’s role is to Destabilise The Middle East, which you are seeing now, in the region after Jesuit controlled America wrecked the countries with their Illegal Wars. I have told you this on many previous occasions.

The only reason Rothschild was allowed to take over The Bank of England, is because the JESUITS WANTED IT THAT WAY, & he was made Custodian, of The Vatican Treasury. all part of The Plan.

There is one thing stopping the New World Order Gathering Speed, which is in my opinion due to The Fact that Vladimir Putin, can not be dismissed & Taught a Lesson, like Gaddafi,& Sadam, who tried to Buck The Petrodollar, viz Previous Post. Russia under the Leadership of President Putin is a MAJOR PLAYER, The Largest Single Producer of Oil & Able to manage their own Economy without any interference from The IMF. We are seeing the Decline of American Influence & Domination in The Middle East. PUTIN has Out Smarted The Jesuit Controlled Obama. This will obviously effect both, Israel & Saudi Arabia, how, we have yet to see. America Hijacked the System, when they broke away from the Breton Woods Agreement, the the Gold Standard, backing The Economy, in favour of The Fiat Money Petrodollar, those who have tried to break away from it will be subjected to Americas Military Might. But Putin has seen that Syria, would be a stepping stone to IRAN,i.e. RUSSIA’S BACKDOOR. HE WILL NOT LET THIS HAPPEN, & WILL shore up his Flanks to make certain of that.

This is a different Ball Game to Previous Crises as both sides were Jesuit Controlled. I am convinced Vladimir Putin is No Puppet, & has shown himself to be a very able Puppet Master.

SO MOTE IT BE:


REGARDS …. WASP
The Tap Blog is a collective of like-minded researchers and writers who’ve joined forces to distribute information and voice opinions avoided by the world’s media.

22 Responses to “Is Alex Jones a shill?”