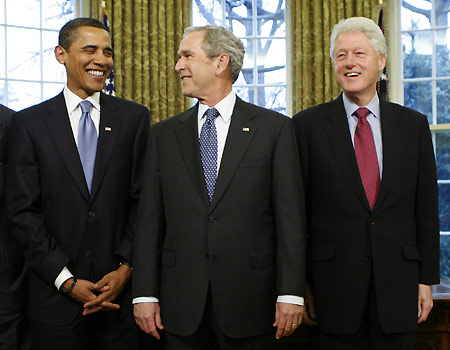 Obama ignored Congress over Libya, and tried to do so over Syria.  Bush lied over Iraq and Afghanistan.  Clinton comes into the firing line too re Yugoslavia and Sudan.

Impeachment: Congress Fires Opening Shot Across Obama’s Bow.
By John Walsh
August 31, 2013 “Information Clearing House – “Mr. President, in the case of military operations in Libya you stated that authorization from Congress was not required because our military was not engaged in “hostilities.” In addition, an April 1, 2011, memorandum to you from your Office of Legal Counsel concluded:…”President Obama could rely on his constitutional power to safeguard the national interest by directing the anticipated military operations in Libya—which were limited in their nature, scope, and duration—without prior congressional authorization.’”
“We view the precedent this opinion sets, where “national interest” is enough to engage in hostilities without congressional authorization, as unconstitutional.”
Text from letter of Rep. Scott Regall (R, VA) to Pres. Obama
Signed by 140 Reps, including 21 Democrats
The letter of Scott Regall (1) to Barak Obama has exploded on the scene with its opening words:
“We strongly urge you to consult and receive authorization from Congress before ordering the use of U.S. military force in Syria. Your responsibility to do so is prescribed in the Constitution and the War Powers Resolution of 1973.
“While the Founders wisely gave the Office of the President the authority to act in emergencies, they foresaw the need to ensure public debate – and the active engagement of Congress – prior to committing U.S. military assets. Engaging our military in Syria when no direct threat to the United States exists and without prior congressional authorization would violate the separation of powers that is clearly delineated in the Constitution.”
With these perhaps historic words the Congress has begun to claw back its Constitutional right to decide issues of war and peace. Significantly the letter comes from a Republican lawmaker, and it is clearly a tribute to the leadership of the libertarians in the Republican Party, most notably Ron Paul, Justin Amash and Rand Paul.
But the situation is grave enough, possibly leading on to a World War, that 21 Democrats have challenged the President and their Party bosses to sign the statement. They are moving beyond partisanship as Ron Paul did in challenging George W. Bush on the war on Iraq.
If that were all that the letter said, it would be momentous enough. But the statement goes further and labels Obama’s cruel war on Libya as “unconstitutional,” because it was done without so much as a nod to Congress. In the end no lawyer and no court, not even the Supreme Court, can overrule Congress when it decides what to do when it considers a serious presidential action as “unconstitutional.” In Libya Obama usurped the powers of Congress. If Congress takes the next step and determines that such an action rises to the level of “high crimes and misdemeanors,” then it is an impeachable offense.
It is not hard to see the implications of the warning to Obama that the Representatives are issuing in raising Libya. If Obama attacks Syria, that will be the second offense, greatly strengthening the case for impeachment.
The implied threat of impeachment is of utmost importance because the President, long become an Emperor, will heed no warning unless it is backed by threat of punishment.
So far so good. But unfortunately Rep. Barbara Lee did not sign Rigell’s letter but instead drafted another and circulated it (2). Crucially this letter carried no mention of the Libyan war and the violation of the Constitution it represented. It garnered an additional 22 signatures, all Democrats, over and above those who signed onto Rigell’s letter. (At least one Republican Congressman’s office stated that they received no Dear Colleague letter from Lee on her letter so perhaps it went only to Dems.)
This is very disturbing since back in the day of the Iraq war, Barbara Lee led resistance to Bush and backed John Conyers’s promise of a impeachment hearings for Bush in 2006, a promise Conyers promptly broke on getting re-elected. Now in the age of Obama, is Lee changing from an opponent of war into a partisan hack? This writer contacted Lee’s Washington and California offices seeking clarification. But the staff was unwilling to comment and the communications staffer did not return either an email or phone call.
In one way Obama’s assault on Libya and now on Syria is worse than George W. Bush’s war on Iraq. Bush at least took the time to lie to Congress. But such a lie to Congress is an indictable offense, and the lie is easily demonstrable if Congress marshals the likes of a Watergate hearing. So an impeachment move against Obama is also an opening for a move to indict Bush. And perhaps the unconstitutional assaults of Clinton on Sudan and Yugoslavia will be revisited. One can only hope.
It is time for all antiwarriors to champion the idea of impeachment and push for it now. The slogan might well be, “Impeach Obama. Indict Bush.” It will not happen unless we demand it. And if we do not, we are acquiescing to endless war and possible disaster for the world.
John V. Walsh can be reached at John.Endwar@gmail.com – He is a founding member of ComeHomeAmerica ( www.ComeHomeAmerica.US). The CHA statement of opposition to the Syrian intervention can be seen at the web site just cited.