In contrast to my last email Dennis Lawson talks sense.
Note; the pressure is on globalists to debunk climate change deniers.
Only last weekend the Borders suffered sever chemtrailing and by the light of tonight’s moon I can see them spraying. I don’t know about elsewhere but dry tickly throat is rife in our area. I put it down to chemtrailing.
Kind regards,
Gordon.

keep looking up has left a new comment on your post “I can see them spraying us at night by the light o…“:

We had heavy spraying last night in Tayside as well. Looking at the sky the sky this morning it seems that they deployed HAARP overnight.

Anyone else seen the ‘new generation’ chemtrailing ?
I took some pics and posted them here… 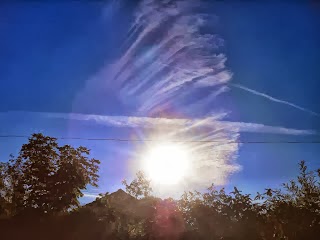 Lord Lawson’s Global Warming Policy Foundation say the Met Office’s predictions are biased
The Met Office’s global warming predictions are flawed and could result in millions of pounds being squandered, it is claimed.
A report for a think tank led by former Tory chancellor Lord Lawson says a computer programme behind figures that shape climate change policy is biased in favour of higher temperatures.
Large sums of public and private sector money could be ‘malinvested’ in everything from wind farms to heat-proof road surfaces as a result, it claims.
Lord Lawson, chairman of the Global Warming Policy Foundation, said: ‘The Government’s policy of abandoning cheap conventional energy and moving to expensive (and unreliable) renewable energy has always been of dubious merit.
‘The fact that it now emerges this policy has been based on projections by a computer model which has been found to be fatally flawed means that an independent expert review of the model and its projections is both essential and urgent.’
The claim, hotly disputed by the Met Office, comes as scientists and officials meet in Stockholm to finalise a major report by the United Nations’ Intergovernmental Panel on Climate Change.