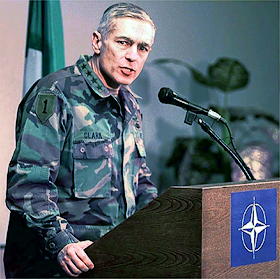 Continue reading the main story
Singer James Blunt has told the BBC how he refused an order to attack Russian troops when he was a British soldier in Kosovo. Blunt said he was willing to risk a court martial by rejecting the order from a US General.
But he was backed by British Gen Sir Mike Jackson, who said: “I’m not going to have my soldiers be responsible for starting World War III.”
Blunt was ordered to seize an airfield, but the Russians had got there first.
In an interview with BBC Radio 5 live, broadcast on Sunday, he said: “I was given the direct command to overpower the 200 or so Russians who were there.
“I was the lead officer with my troop of men behind us…
Continue reading the main story
“The soldiers directly behind me were from the Parachute Regiment, so they’re obviously game for the fight. 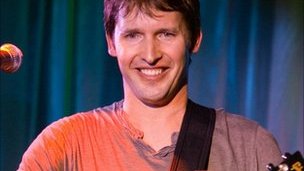 “The direct command [that] came in from Gen Wesley Clark was to overpower them. Various words were used that seemed unusual to us. Words such as ‘destroy’ came down the radio.”

The confusion surrounding the taking of Pristina airfield in 1999 has been written about in political memoirs, and was widely reported at the time.
But this is the first time Blunt has given an account of his role in the incident.
Blunt, who was at the head of a column of 30,000 Nato troops with his unit, told Pienaar’s Politics it was a “mad situation”.
Continue reading the main story

He said he had been “party to the conversation” between senior officers in which Gen Clark had ordered the attack.
“We had 200 Russians lined up pointing their weapons at us aggressively, which was… and you know we’d been told to reach the airfield and take a hold of it.
“And if we had a foothold there then it would make life much easier for the Nato forces in Pristina. So there was a political reason to take hold of this.
“And the practical consequences of that political reason would be then aggression against the Russians.”

Asked if following the order would have risked starting World War III, Blunt, who was a 25-year-old cavalry officer at the time, replied: “Absolutely. And that’s why we were querying our instruction from an American general.
“Fortunately, up on the radio came Gen Mike Jackson, whose exact words at the time were, ‘I’m not going to have my soldiers be responsible for starting World War III’, and told us why don’t we sugar off down the road, you know, encircle the airfield instead.
If Gen Jackson had not blocked the order from Gen Clark, who as Nato Supreme Commander Europe was his superior officer, Blunt said he would still have declined to follow it, even at the risk of a court martial.“And after a couple of days the Russians there said: ‘Hang on we have no food and no water. Can we share the airfield with you?’.”
He said: “There are things that you do along the way that you know are right, and those that you absolutely feel are wrong, that I think it’s morally important to stand up against, and that sense of moral judgement is drilled into us as soldiers in the British army.”
Blunt left the Army in 2002 to pursue a career in music, later scoring a worldwide hit with You’re Beautiful.

5 Responses to “How a US General tried to start WW3”