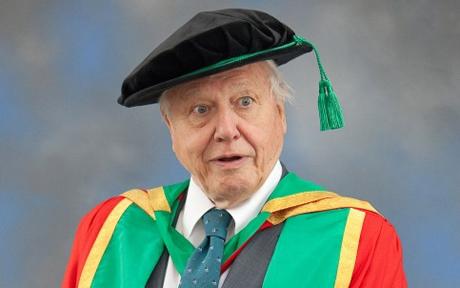 Top globalist Sir David Attenborough, who last year described humans as a ‘plague on Earth’, has now gone on record in calling for nations of the world to stop sending food aid to starving nations in order to reduce the population of the world.
Speaking with the Daily Telegraph, the highly decorated psychopath expanded upon his notion that the plague of humanity must be reduced throughout the world. Reduction that, according to him, really starts with starving poorer nations that have been decimated by first world global powers (and could be fed with about a week or so of military spending). The problem, Attenborough says, however, comes down to numerous “huge sensitivities” that continue to block the goal of massive population reduction.
And what are these ‘huge sensitivities’?
Well, it turns out that the ‘sensitivities’ blocking the decimation of the world’s human population include ‘the right to have children’. How truly horrible. Instead, it seems Attenborough thinks that we should revoke the right of citizens to even have children, let alone feed the existing humans in hungry nations. In the interview, Attenborough states:

“We say, get the United Nations to send them bags of flour. That’s barmy.”

Now perhaps the most alarming thing to note here is that this psychopath who justifies his genocide with faulty reasoning is considered a ‘national treasure’ in Britain. Better yet, Attenborough also has 31 honorary degrees from British universities, which is more than any other person. This is in addition to his numerous ‘royal’ titles.
Truly, Attenborough’s comments being met with mainstream media attention in a positive light shows just how far gone the mega media is. Ultimately, there is a war on our right to not only have a family and basic necessities, but life itself. If Attenborough wants to reduce the population and starve entire nations into death, then why does he not offer up his own life first?
http://www.storyleak.com/attenborough-stop-feeding-third-world-reduce-population/

TAP – stop feeding the BBC, and the other MSM.