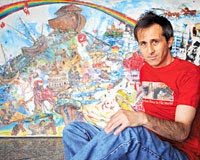 I am busy round the clock painting a new collection of paintings.  Otherwise I could comment/write about the media hit going on against UKIP or this Kenyan apparently ‘false flag’ operation or the ludicrous on-going war mongering by ‘my’ government and its allies… keep it up Tap.

I like to believe Tap and the like minded have so far helped us to avoid the UK/US ‘official’ invasion of Syria.

I was perturbed about comments about Alex Jones being a shill. I have heard them before, long ago by William Cooper.
For interest, Alex Jones interviews Bill Cooper
http://www.youtube.com/watch?v=kfM7xlivCXI,

This morning Gerald Celente quoted an InfoWars article re Kenya and Icke, Mike Adams etc continue to deal with him. May be he is, may be he isn’t. Beware of divide and rule Tapsters and keep focus on the bigger picture: LOVE VIBRATION!

I love the alternative media!!!
However, changing tack and between painting, on Rense I found this:
10 Credible Mermaid Sightings?
http://sorendreier.com/10-credible-mermaid-sightings/

Contracted by the Iceland GeoSurvey, Dr. Schmidt and his Danish team worked on “seismic mapping and sampling of the ocean floor” to locate promising sites for oil and natural gas reserves.
At nearly 3,000 ft (1,000m) below the ocean’s surface, Dr. Schmidt reported not only seeing some interesting phenomenon, but also hearing some remarkable things. After reporting to the Iceland GeoSurvey about the strange sounds he heard when he was scanning the ocean floor, he requested to undertake an investigation, which was declined.
“We were reminded of our confidentiality agreements. And we were told we could not share our recording with anyone else,” Dr. Schmidt told journalist Jon Frankel on Animal Planet’s documentary, “Mermaids: The New Evidence.”
Dr. Schmidt ended up conducting his own investigation where he “took down two cameras on every dive, just in case we see them.” Commenting on his footage, Dr. Schmidt said Jon Frankel, “well I looked at it, and knew I was looking into the face of another intelligent species, like us.”
(TAP –  been smoking again, Ned?)
Ned –  Made me think of the dolphin military project mentioned in this:
PROJECT CAMELOT: AARON McCOLLUM: PROJECT SEAGATE – A Kerry Cassidy Interview
http://www.youtube.com/watch?v=AoB18unO7iA
(TAP – I see part deception/myth creation and part truth in many channels.  Each of us creates our own truth in the end.  I would not be willing to not look at these sources, if you see what I mean.  Yet believing them as 100% credible, I do not.)
I have not watched/listened through entirely (time!), but at my pc and thought Mermaids might make a fun break from terror.

TAP –  Thanks, Ned.  You put life and colour into the discussion, and rise above the doom and gloom.  Very important to do that.

What appears to be a man-made pyramid oriented to the cardinal directions has been identified by sonar at a depth of approximately 40 metres (130 feet) under water off the Azores islands. See here for a video (Portuguese commentary) of the discovery:
http://videos.sapo.pt/9j3fd6z5h8cVMiBr5sUa.

The location appears to be between Sao Miguel and Terceira (the biggest Azorean Islands) and it also lies close to this underwater volcano:
http://en.wikipedia.org/wiki/Dom_Jo%C3%A3o_de_Castro_Bank.

Many thanks to Pedro Branco, Eduardo Costa, Viviana Lopes, Daniel Mendes, Jo Anne Taisbin and others who have messaged me to tell me about this. The name of the discoverer, featured in the video, is Diocleciano Silva. It is not clear to me at the moment how recent the discovery is — there is some suggestion that it might have been made several months ago — but I would grateful for any further information that becomes available. Eduardo Costa and Daniel Mendes both sent me a link to this short article on the subject in English:
http://gregdougall.wordpress.com/2013/09/21/an-undersea-pyramid-has-just-been-discovered-in-the-azores/

Looks like I might need to get my wetsuit on again! I wasn’t planning any further diving research for the sequel to Fingerprints of the Gods but if this checks out I’m there!