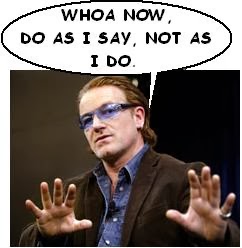 Bono and awards from Queen Elizabeth II
Bono claims to be “representing the poorest and most vulnerable people“. But talking to a wide range of activists from both the poor and rich worlds since ONE published its article last week, I have heard the same complaint again and again: that Bono and others like him have seized the political space which might otherwise have been occupied by the Africans about whom they are talking. Because Bono is seen by world leaders as the representative of the poor, the poor are not invited to speak. This works very well for everyone – except them.
The ONE campaign looks to me like the sort of organisation that John le Carré or Robert Harris might have invented. It claims to work on behalf of the extremely poor. But its board is largely composed of multimillionaires, corporate aristocrats and US enforcers. Here you will find Condoleezza Rice, George W Bush’s national security adviser and secretary of state, who aggressively promoted the Iraq war, instructed the CIA that it was authorised to use torture techniques and browbeat lesser nations into supporting a wide range of US aims.
Here too is Larry Summers, who was chief economist at the World Bank during the darkest days of structural adjustment and who, as US Treasury secretary, helped to deregulate Wall Street, with such happy consequences for the rest of us. Here’s Howard Buffett, who has served on the boards of the global grain giant Archer Daniels Midland as well as Coca-Cola and the food corporations ConAgra and Agro Tech. Though the main focus of ONE is Africa, there are only two African members. One is a mobile phone baron, the other is the finance minister of Nigeria, who was formerly managing director of the World Bank. What better representatives of the extremely poor could there be?

As Bono and his bandmates took to the Pyramid Stage, activists from direct action group Art Uncut inflated a 20ft balloon emblazoned with the message “U Pay Your Tax 2?” exposing U2′s offshore tax avoidance.
If, as ONE does, an organisation keeps telling you that it’s a “grassroots campaign”, it’s a fair bet that it is nothing of the kind. This collaboration of multimillionaires and technocrats looks to me more like a projection of US and corporate power.
I found the sight of Bono last week calling for “more progress on transparency” equally revolting. As Harry Browne reminds us, U2′s complex web of companies, the financial arrangements of Bono’s Product RED campaign and his investments through the private equity company he co-founded are all famously opaque. And it’s not an overwhelming shock to discover that tax justice is absent from the global issues identified by ONE.
There is a well-known if dubious story that claims that at a concert in Glasgow Bono began a slow hand-clap. He is supposed to have announced: “Every time I clap my hands, a child in Africa dies.” Whereupon someone in the audience shouted: “Well fucking stop doing it then.” It’s good advice, and I wish he’d take it.
Bono hanging out with some other NWO criminals:

Obama…the teleprompter reading president who bombs kids for a living and gets a peace prize.

The inconvenient lie that is Al Gore.

Bill Clinton…where do I even start with this guy?

3 Responses to “Bono. U2 should pay your taxes.”