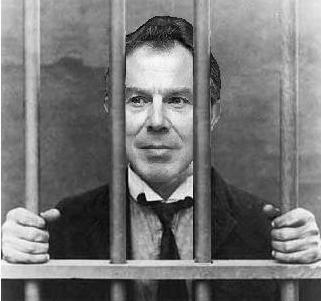 Attempts made so far

1. 29th January 2010. Grace McCann tried to arrest Tony Blair as he left the Chilcot Inquiry. She was restrained by police. Her attempt was reported by Sky News and the Independent. She qualifies for the first bounty for an attempted citizen’s arrest of Tony Blair: £2,619.67. This is one quarter of the money in the pot at the time of her attempt. Grace has kindly donated £2000 to the ICRC and the remainder of her award to the Stop the War Coalition and Iraq Body Count.
2. 22nd March 2010. David Cronin attempted a citizens’ arrest of Tony Blair as he was about to enter a hearing on Palestine in the European Parliament. David approached him, put a hand on his arm and said: “Mr Blair, this is a citizens’ arrest.” He was then pushed away by one of Blair’s bodyguards, whereupon he shouted “You are guilty of war crimes”. His attempt was reported in the Daily Telegraph, the Daily Mail, the Guardian, the Irish Times and other outlets.
We raised the question of whether David might fit the definition of a colleague of the site’s founder, George Monbiot, in which case (rule 7), he wouldn’t qualify for the award. This is because David has occasionally contributed articles to the Guardian. But as the two of them had never met or communicated before and as David is neither employed by nor contracted to the Guardian, we decided that he cannot be considered a colleague. He has now met all the criteria for the bounty and has been sent a cheque for £2,801.98. David has generously decided to give the money to the Palestinian Centre for Human Rights in Gaza.
3. 4th September 2010. Kate O’Sullivan attempted to make a citizen’s arrest of Tony Blair at his book signing in Eason’s bookstore in Dublin, Ireland. She made it into the book signing and told him face to face that she was arresting him.  She was removed but no charges were brought against her. Her attempt has met all the criteria for the bounty and she has been sent a cheque for £3,129.02.
The attempt was reported widely by the mainstream press including  The Telegraph, The Irish Times, Sky News, Press Association and in the Guardian. Tony Blair has now cancelled his booksigning at Waterstones on the 8th September
4. 14th June 2012. Tom Grundy attempted to arrest Tony Blair while he was speaking at Hong Kong University.
Tom reports: “My confrontation with Blair came during the deadliest week of violence in Iraq since the US pull-out, and a day after the International Criminal Court prosecutor asked judges to hand down their first sentence to a fellow war-criminal, Congolese warlord Thomas Lubanga. All current ICC investigations and prosecutions are related to African nations, yet Mr Blair’s status as an ex-Western leader does not exempt him from its founding Rome Statute, to which Britain is a signatory.
“Some will find the comparison absurd but there is little moral difference when the products of their respective leaderships were mass human rights violations against civilian populations. Blair has requested that people “move on” from the Iraq War yet, with documented civilian deaths now totalling at least 107,013, leading QC Michael Mansfield has confirmed that there now appears to be enough evidence to trigger an ICC investigation. Legally, the type of weaponry deployed in the war (depleted uranium and cluster bombs) can be described as ‘indiscriminate’, thus making him liable for mass civilian causalities.
“As I put to Blair personally, he is answerable to the sixth 1950 Nuremburg Principle which forbids ‘wars of aggression’ and gave rise to the Rome Statute – I also stated that he defied articles 31 and 51 of the UN charter. Leaked Downing Street memos from 2002 reveal his determination to follow the US into Iraq despite knowing his government would be violating the two aforementioned UN articles which would permit an invasion. In fact, the later discredited evidence of Saddam’s weapons of mass destruction was irrelevant to Blair as he admitted during the 2009 Chilcot Inquiry that he would have attacked Iraq regardless as to whether such WMDs were discovered.”
His attempt was widely reported in the media. Tom received £2,420.89 from the Arrest Blair campaign. He is donating the money to various relevant charities.