Notice this woman. Notice the patterns in her shirt. Those red areas are largely rectangular in shape. Notice, too, the tie-around clothing. In all likelihood this woman is not injured and is, rather, a crisis actor paid for the role.
This is a major revelation, which means the entire claim of an Islamist attack against Nairobi mall shoppers is a categorical hoax.

http://newsinfo.inquirer.net/files/2013/09/Westgate-Mall-attack-Nairobi-300×319.jpg
A close-up view demonstrates the rectangular shape with the clothing tie acting to fix, that is to fix the blood packet against her white shirt. Same color, same fakery as the Boston hoax and more. As pointed out by one of our posters, too, it is the wrong color for blood.
Regardless, where are the entrance wounds from the gun-blasts? Even so, if she was shot in the abdomen in two places at relatively close range she wouldn’t be walking about for the Reuter’s camera shoot.
The rectangular shape, right screen, plus the use of the clothing tie is a give-away for the use of fake blood packs in this individual.
The following video is filled with evidence of set-ups, staging, fakery, fake fright, fake shock, and fake wounded. Watch it carefully. The evidence will be clear. The Zionist-controlled Kenyan media is all over the place, people with dozens of cameras, people showing no fright, fear, or caution about being shot or their being gunman on the loose, that is except the crisis actors, most of whom appear to be non-Kenyan.
These non-Kenyans are Zionist agents, many of whom are likely Kenyan-based Jews, Sayanim agents working for the Mossad. Therefore, if anyone was shot in that mall, it was the Mossad and its collaborators who did so, not any Muslim terrorists.
Yet, there is no proof of anyone being shot. Still images are insufficient. The real proof is in CCTV camera images. No such images have been shown.
Notice the immense and deliberate degree of staging and how they staged the fright scenes. Also, see how after the Jewish-appearing woman comes forth with her two children, behind her there is a woman acting as if injured. That woman in white, once again, is a crisis actor.
Note, again, the rectangular nature of the red color, both on the abdominal area (actually, mere fake color staining her sweatshirt) and the repeated shapes on her arm. Furthermore, if she really did have two gunshot wounds what was she doing casually walking behind the other crisis actress, the mother with the two children? This woman is not injured. It is a fake.
Once again, this is moulage, fake application of phony red coloring to imitate blood. See the fact that the Kenyans got wise from the Boston hoax. They stuffed the red packet underneath the clothing and, then, popped it. Same on the arm. This is 100% proof that the Nairobi mall shooting is a hoax; no one was injured; nobody died.
Did the Mossad combine crisis actors, fake grievers, fake shock victims, and other phonies with a real killing? Further analysis is needed to determine the plausibility of such a claim. Yet, thus far the evidence points to a fake event, a hoax, perpetrated by the Kenyan government in collaboration with the UK, the Zionist entity, and the Obama White House.
Regardless, there is no way in a real event that all such camera shoots could be so thoroughly staged, and they are obviously staged by any analysis. Therefore, the Nairobi mall shooting is a hoax, like all the others. Let anyone prove otherwise.
http://nodisinfo.com/Home/nairobi-mall-massacre-zionist-hoax/?utm_source=rss&utm_medium=rss&utm_campaign=nairobi-mall-massacre-zionist-hoax 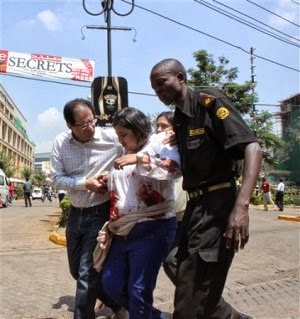