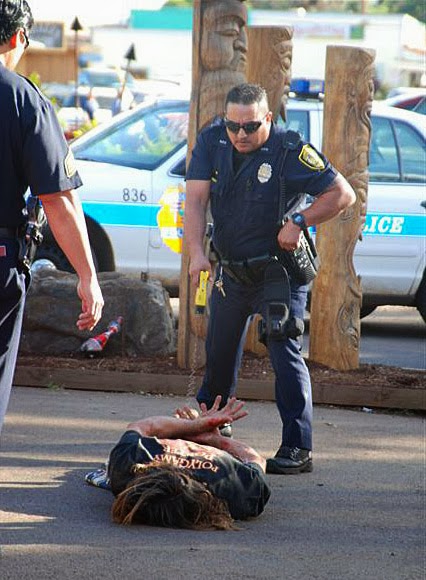 The Sheriff’s Department in Buchanan County, Missouri has begun using 80,000-volt enhanced handcuffs for prisoner transfers and some court appearances while dismissing potential safety concerns, KQTV-TV reported on Monday.
“It affects the muscles of the body and it doesn’t really affect anything else,” Captain Jody Hovey told KQTV. “Everyone says it affects your heart, and it does not. What it does really is it just sends a charge through the body that locks up your muscles.”
Hovey said to KQTV that the “stun cuffs,” as they have been called, are tied around a prisoner’s arm or leg and can be operated via remote control from as far as 100 yards away. His department is currently using only two pairs, valued at $2,200 apiece, citing “bugs and kinks” that need to be corrected before more are ordered.
In one demonstration, an unidentified officer from another department was seen flailing on the ground after being shocked while wearing the device. Hovey explained to KQTV that prisoners will be informed of the handcuffs’ voltage capacity before being forced to wear them.
“It’s definitely a lot safer for the officers,” Hovey told KQTV. “So if the inmate wants to start fighting you, you don’t have to go hands-on.”
ABC Fusion reported in August 2013 that according to Amnesty International, 500 people died in the U.S. after being shocked by Tasers between 2001 and 2012. Tasers typically deploy a charge of 50,000 volts, just over half the reported capacity of the new “stun cuffs.”
http://www.rawstory.com/rs/2013/09/26/missouri-cops-now-using-80000-volt-stun-cuffs-on-prisoners/
The Tap Blog is a collective of like-minded researchers and writers who’ve joined forces to distribute information and voice opinions avoided by the world’s media.

One Response to “500 Americans killed by taser”