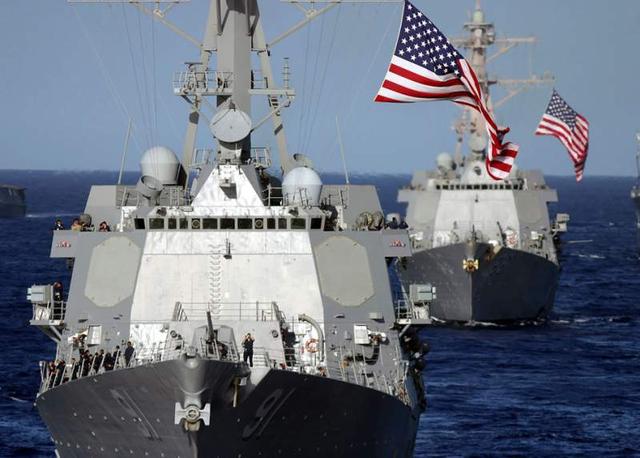 US and Allied Warships off the Syrian Coastline: Naval Deployment Was Decided “Before” the August 21 Chemical Weapons Attack

A massive US and allied naval deployment is occurring in the Red Sea, the Eastern Mediterranean and the Persian Gulf.
While this display of military might may not be part of an immediate attack plan on Syria, it is creating an atmosphere of fear and panic within Syria.
The US Navy has deployed the USS San Antonio, an amphibious transport ship to the Eastern Mediterranean. The San Antonio is joining five US destroyers which “are already in place for possible missile strikes on Syria, a defense official said Sunday.”

The USS San Antonio, with several helicopters and hundreds of Marines on board, is “on station in the Eastern Mediterranean” but “has received no specific tasking,” said the defense official, who spoke on condition of anonymity. US Navy deploys five warships, one amphibious ship to Mediterranean for Syria

While the USS San Antonio has amphibious landing equipment, which can be used to land some six thousand sailors and marines, “no boots on the ground”, however, remains the official motto.
So why then has the US deployed its most advanced amphibious landing ship? The reports suggest that this is routine and there are no attack plans:

“No amphibious landing is in the works, however, as President Barack Obama has ruled out any “boots on the ground” (Ibid)
USS San Antonio
There are currently five destroyers off the coast of Syria, the USS Stout, Mahan, Ramage, Barry and Graveley, not to mention the San Antonio amphibious landing vessel.
The destroyers are equipped with Tomahawk cruise missiles which “are ready to fire … if Obama gives the order.”
On 28 August the U.S. Navy announced the deployment of  the Arleigh Burke-class destroyer USS Stout en route to join four other destroyers “amid allegations that the regime of Syrian president Bashar al-Assad used chemical weapons against civilians on August 21″.
In a not unusual twist, this deployment of US and allied naval forces preceded the chemical weapons attack which is being blamed on president Bashar al Assad.
According to Naval records, the guided           missile destroyer  USS Stout (DDG 55) departed Naval Station Norfolk, Va. on August 18, 2013, “for           deployment to the U.S. 6th Fleet area of responsibility” (see           image below upon its departure in Norfolk on August 18).
The USS Ramage destroyer left Naval Station Norfolk on August 13 for the Eastern Mediterranean, “to relieve the Mahan”.
Yet in fact what was decided was to deploy all five destroyers along the Syrian coastline well in advance of the chemical attacks of August 21, which constitute Obama’s pretext to intervene on humanitarian grounds.

The amphibious transport dock San Antonio, carrying elements of the 26th Marine Expeditionary Unit, has joined the five Navy destroyers in the eastern Mediterranean Sea, a defense official confirmed [August 30].
“No specific tasking has been received at this point,” the official said, speaking on condition of anonymity. “The San Antonio is being kept in the sea as a prudent decision should ship capabilities be required.”
The five destroyers positioned near Syria are the: Barry, Gravely, Mahan, Ramage and Stout.
The Navy had been operating with three destroyers in the Med, and the Ramage and Stout were expected to replace Mahan and Gravely, respectively, when they arrived there this month. But officials decided to keep all five in place as the U.S. weighs an attack. Each destroyer is capable of carrying up to 90 Tomahawk cruise missiles, although they usually have fewer on hand during deployment. marinecorpstimes.com, August 30, 2013

This massive naval deployment was ordered prior to the tragic event of August 21, which begs the question:

If the chemical weapons attack is a justification for intervening, why was the order to launch an R2P “humanitarian” naval operation against Syria decided upon “Prior” to August 21?
Was there advanced knowledge or intelligence regarding the timing and occurrence of the 21 August Chemical Weapons attack?
http://www.globalresearch.ca/massive-naval-deployment-us-and-allied-warships-deployed-to-syrian-coastline-before-the-august-21-chemical-weapons-attack/5347766?utm_source=rss&utm_medium=rss&utm_campaign=massive-naval-deployment-us-and-allied-warships-deployed-to-syrian-coastline-before-the-august-21-chemical-weapons-attack