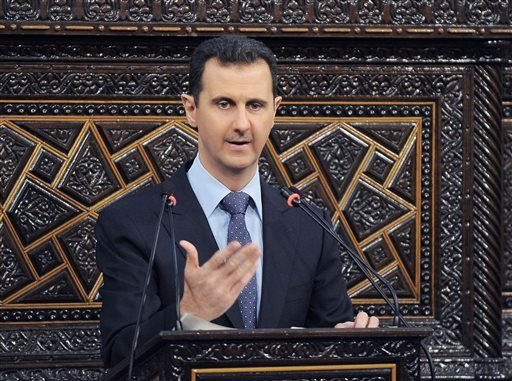 would he be so stupid?  NATO is hunting any excuse it can lay its hands on – even using chemical weapons through their proxy ‘rebels’ and blaming it on Assad.

In May Assad was accused of using nerve gas.  That time the accusation didn’t stick either.  In fact testimony from the victims strongly suggested it was the rebels who released the gas, according to a UN official.

This is the second attempt at starting a war based on the use of chemical weapons by the rebels, dressed up by the media as an action of the Syrian government.

Testimony from victims strongly suggests it was the rebels, not the Syrian government, that used Sarin nerve gas during a recent incident in the revolution-wracked nation, a senior U.N. diplomat said Monday.
Carla del Ponte, a member of the U.N. Independent International Commission of Inquiry on Syria, told Swiss TV there were “strong, concrete suspicions but not yet incontrovertible proof,” that rebels seeking to oust Syrian strongman Bashar al-Assad had used the nerve agent.