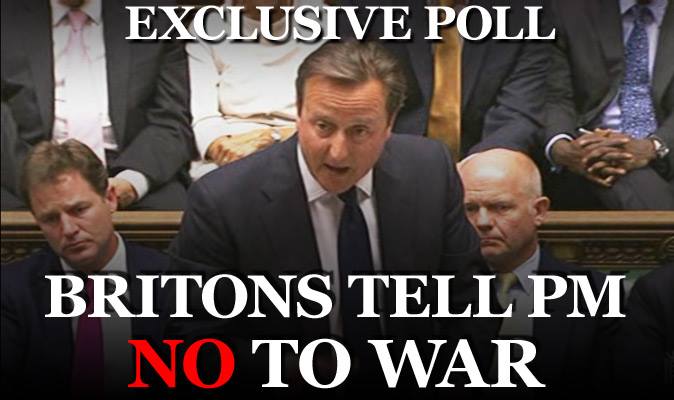 http://www.express.co.uk/news/uk/425446/Britons-tell-Cameron-NO-to-war-Only-EIGHT-per-cent-want-urgent-strikes-on-Syria
The poll results, which come as MPs begin their historic Commons debate on military action, show 80 per cent of people are against David Cameron launching an immediate attack, while 12 per cent are undecided.

A significant 41 per cent of people are against action by Britain in any circumstances, while 39 per cent would only agree with a launch if the UN confirms chemical weapons have been used by the Syrian regime and then sanctions a strike.

The results are a blow to David Cameron who has been arguing for intervention amid a growing chorus of MPs urging caution following the lessons of the Iraq war 10 years ago.

4 Responses to “Message to Prime Murderer. Only 8% want war.”