Picked up from Veterans Today: 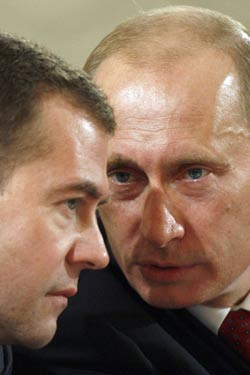 Medvedev with his protege Putin.  Why are these two revealing information about alien presence on earth?
PM Medvedev: I’ll tell you the first and last time. Together with nuclear suitcase president bring folder – Top Secret. And it is entirely devoted to the strangers that visited our planet. The report is provided by the special service which handles the control of aliens in our country… After management team – two folders and a nuclear small suitcase are transferred to the new President. You can receive more detailed information, having watched the chronicle documentary film of the same name: Men In Black

Reporter: Oh you.. how many?

PM Medvedev: How may them among us I can’t tell because the panic will begin.


Wouldn’t you love for the BBC to call up the Russian Embassy iand ask… Yeah, I know! Now how did Arsenal do today?