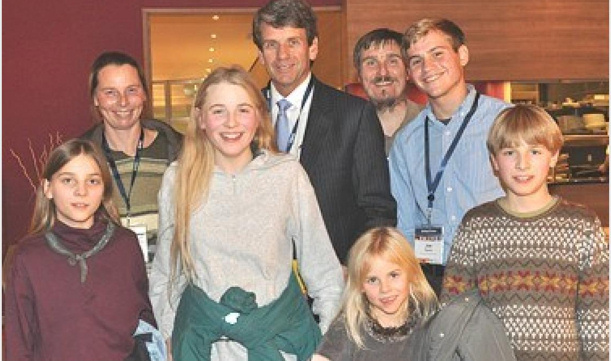 Four children, ages 7 to 14, have been forcibly taken from their Darmstadt, Germany, home by police armed with a battering ram, and their parents have been told they won’t see them again soon, all over the issue of homeschooling, according to a stunning new report from the Home School Legal Defense Association.
HSLDA, the world’s premiere advocate for homeschoolers, said the family of Dirk and Petra Wunderlich has battled for several years Germany’s World War II-era requirement that all children submit to the indoctrination programs in the nation’s public schools.
The shocking raid was made solely because the parents were providing their children’s education, HSLDA said. The organization noted the paperwork that authorized police officers and social workers to use force on the children contained no claims of mistreatment.
“The children were taken to unknown locations,” HSLDA said. “Officials ominously promised the parents that they would not be seeing their children anytime soon.”
The raid, which took place Thursday at 8 a.m. as the children were beginning their day’s classes, has been described by observers as “brutal and vicious.”
A team of 20 social workers, police and special agents stormed the family’s home. HSLDA reported a Judge Koenig, who is assigned to the Darmstadt family court, signed an order authorizing the immediate seizure of the children by force.
“Citing the parents’ failure to cooperate ‘with the authorities to send the children to school,’ the judge also authorized the use of force ‘against the children’ … reasoning that such force might be required because the children had ‘adopted the parents’ opinions’ regarding homeschooling and that ‘no cooperation could be expected’ from either the parents or the children,” HSLDA said.
Dirk Wunderlich told the homeschool group: “I looked through a side window and saw many people, police and special agents, all armed. They told me they wanted to come in to speak with me. I tried to ask questions, but within seconds, three police officers brought a battering ram and were about to break the door in, so I opened it.”
Join the battle over Germany’s homeschooling ban.
His narration continued: “The police shoved me into a chair and wouldn’t let me even make a phone call at first. It was chaotic as they told me they had an order to take the children. At my slightest movement the agents would grab me, as if I were a terrorist. You would never expect anything like this to happen in our calm, peaceful village. It was like a scene out of a science fiction movie. Our neighbors and children have been traumatized by this invasion.”
Human rights violations
Michael Farris, HSLDA founder, said in a report the actions violated a number of established European precedents, including provisions of the European Convention of Human Rights.
“The right to homeschool is a human right,” he said, “and so is the right to freely move and to leave a country. Germany has grossly violated these rights of this family.
“This latest act of seizing these four beautiful innocent children is an outrageous act of a rogue nation.”
Read more at http://www.wnd.com/2013/08/police-storm-homeschool-class-take-children-by-force/#3BY5sm3uFBD42p5m.99
The Tap Blog is a collective of like-minded researchers and writers who’ve joined forces to distribute information and voice opinions avoided by the world’s media.