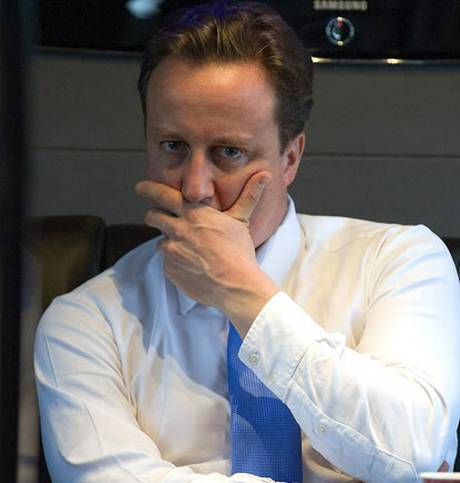 You know it’s bad when Russia accuses Britain of breaking human-rights and freed-of-the-press declarations, but that is what it has done following the revelations that the UK Prime Minister Cameron was behind the decision to ‘pulverize’ The Guardian’s hard-drives in an effort to suppress more leaks. As Reuters reports, two sources with direct knowledge confirm Cameron ordered his top civil servant to “deal with this matter.” Falling back on the old playbook, the government defends its actions on the basis of ‘threatening national security’, and adds, “we won’t go into specific cases but if highly sensitive information was being held insecurely we have a responsibility to secure it,” with regard the ‘pulverization’.

British Prime Minister David Cameron ordered his top civil servant to try to stop revelations flowing from the Guardian newspaper about U.S. and British surveillance programs, two sources with direct knowledge of the matter said.
News that Cabinet Secretary Jeremy Heywood had contacted the Guardian drags Cameron into a storm over Britain’s response to media coverage of secrets leaked by fugitive U.S. intelligence contractor Edward Snowden.
…
The sources named the official as Heywood, who is Cameron’s most senior policy adviser. “The prime minister asked the Cabinet Secretary to deal with this matter, that’s true,” one source told Reuters.
Government supporters say information leaked by Snowden, who has obtained asylum in Russia, could threaten national security. However, rights groups have accused the government of an assault on press freedom over a series of incidents.
…
A Downing Street spokeswoman said: “We won’t go into specific cases but if highly sensitive information was being held insecurely we have a responsibility to secure it.”
…
It has argued that these were operational security matters.
http://www.zerohedge.com/news/2013-08-21/uk-prime-minister-was-behind-guardians-hard-disk-pulverization