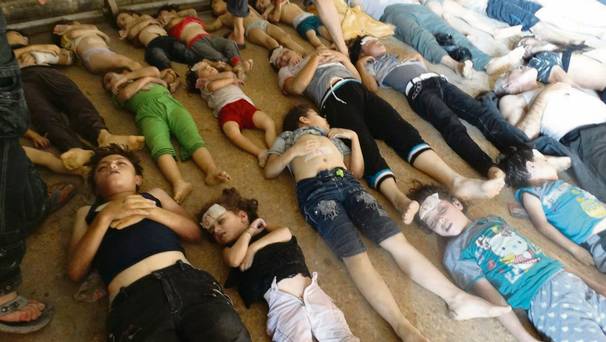 Gordon Duff Interview with PressTV: Is America about to attack Syria on fabricated evidence?

Who killed these innocent children and scores of others with a deadly nerve gas in Syria? Was it Bassar al-Assad, as the West claims? Or is Assad being framed for an attack that was actually carried out by his Western accusers?

Press TV has conducted an interview with Gordon Duff, Senior Editor of Veterans Today, about the crisis underway in Syria. This helps to cast new light on the situation.
To see the 4-minute interview with Gordon Duff on PressTV, in which he alleges that the UN Syria team may be about to fabricate evidence to justify an attack on Syria, click HERE.
Readers may prefer to read an approximate transcript of the interview first and then come back to the video later.
An important note will be found at the end. This comes from a valued source who reveals that a hacker has obtained definite evidence that Britain could be behind the chemical weapons attack on the Syrian people. This appears to be part of an elaborate scheme cooked up by the US, Britain and Israel to start yet another war in the Middle East on a false pretext. First they aim to destroy Syria. Then they plan to destroy Iran and take possession of its oil wells.
The trillion dollar question is: will Russia and China stand by and let them get away with this monstrous war crime — a crime which not only threatens their own vital interests but is, in fact, no more than a proxy war against them?
http://www.darkmoon.me/2013/gordon-duff-interview-with-presstv-is-america-about-to-attack-syria-on-fabricated-evidence/
Dan H. said…
The thing to remember with these gas attacks is what you’re NOT seeing in the footage of the rescue attempts. Look closely: see any rescuer wearing appropriate NBC protective clothing?

They’re not wearing protective kit at all. Not a respirator, not a suit, not even protective gloves. People are being permitted to wander through the makeshift mortuaries at will, as well. These are not things you do unless you’re terminally stupid (which stupidity will be rapidly rewarded with a painful death) when dealing with nerve gas attacks.

The attack was assuredly NOT a nerve agent, or the rescuers would not be nearly so cavalier in their lack of protection. A military nerve agent was NOT in use in these attacks.

Note also the lack of damage to most of the corpses. They’re not contorted into strange shapes. They’re not blistered and burned, or even particularly disfigured. They haven’t foamed at the mouth, nor lost control of bladder and bowel (as nerve agent victims usually do). In fact, these people died very quickly indeed.

This is characteristic of a blood agent or even just a suffocating agent being used. The “gas” used could be as simple as a massive overdose of CS gas, as stockpiled by the Syrian police for riot control. This latter agent would be readily available to the rebels, and not so toxic to the users, either.

In short, situation normal here: we’re being lied to. Or rather, we’re being fed excited, overblown and mostly imaginary stories thought up by the Syrian rebels, repeated and trotted out without so much as a second thought by the press here. A moment’s though on the matter, such as “How do you decontaminate people that thoroughly in such primitive conditions?” would have exposed the lie.

As it happens, CS gas (actually a fine dust) decomposes readily in water, so all you need do to get rid of it is wash the victims in plenty of water. This explains the cavalier attitude of the medics and the fact that the site has been cleared so quickly and easily; the agent was CS, not a nerve agent at all.

7 Responses to “Britain behind chemical attacks in Syria”