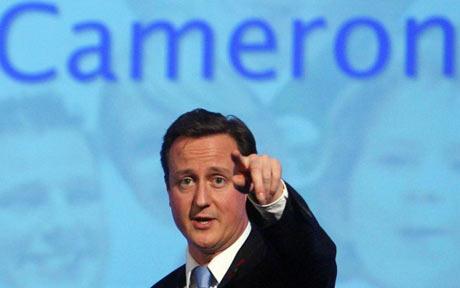 ‘My relatives are making a fortune out of this.  Shame about the poor bloody consumers.  But who gives a fuck about you?’

175 turbines at London Array windfarm in the Thames Estuary are a ‘big win for renewable energy’, prime minister says

Prime minister David Cameron has today cut the ribbon on the London Array, the world’s largest offshore wind farm, in a move that serves to underline Number 10’s support for the UK’s burgeoning wind energy sector.
The 175 turbine project located in the Thames Estuary, owned by DONG Energy, Masdar and E.On, boasts 630MW of capacity, making it comfortably the largest offshore wind farm in the world. It has been fully operational since April, but today it was officially opened by the prime minister alongside climate change minister Greg Barker.
“This is a great day for Britain and a big win for renewable energy,” Cameron said at the opening ceremony. “London Array shows you can build large scale renewable energy projects right here in Britain. This is because when it comes to clean energy, the UK has one of the clearest investment climates globally”.
http://www.guardian.co.uk/environment/2013/jul/04/offshore-windfarm-cameron-london-array

Why don’t they tell people the real news?