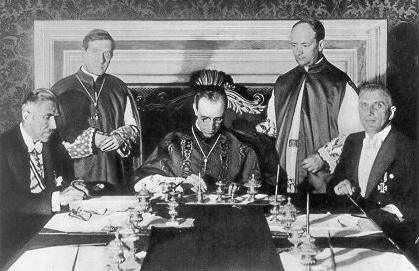 Concordat.  No need to report child abuse and other violations of human rights by the church.

I used a “SWEEP ENGINE” to see if I could get any other stuff that supports what I stated in the last Post.
This is one Article I came across, your readers might be interested in.
WHEN YOU YANK’S WAKE UP, IT WILL BE TOO LATE
DON’T SAY YOU WEREN’T WARNED!

Anatomy of a One World Religion?

Is the world destined to be dominated by a single religion? Which one will it be? Who will be in charge of this theocracy?

With the new millenium, increasing numbers of people have heard about the “One World Religion” purportedly being planned by the ruling elite, i.e., the “Illuminati,” “Masons,” or various other cultic/religious interests. Many people believe that such a One World Religion, if indeed a planned development, will be a form of Catholicism or “New Age Spiritualism,” while others such as Jews and Muslims insist that their ideologies will rule the world. From some circles it appears that, rather than heading for a “new age of enlightenment” with increased personal freedom, including the freedom from religion, as is popularly believed, the United States–and by extension the world–is evidently being pushed instead towards a fascistic theocracy. Although governmental agencies may have had a hand behind some aspects of the “New Age Movement” (NAM), the One World Religion evidently intended by these various agencies is not the pastiche of airy-fairy, lovey-dovey concepts found within the NAM, by which everyone is equal and accepted.

Vying for the authorship of the One World Religion are evidently a number of factions, including certain interest groups that wish the theocracy to be based primarily on Judaic ideology, emulating the firm and merciless hand of Islam’s mullahs and imams. Under such a dictatorship, books would be banned and burned, and freethinkers would be jailed or executed. If the Hassidic Jewish Movement has its way, the so-called Noahide Laws would be followed to the letter, as would many others found in the “Old Testament,” prescribing capital punishment for abortion, euthanasia and “sexual deviation” such as adultery and homosexuality. The punishment, in fact, for breaking any of the Noahide Laws isdecapitation.

Although the term “Noahide Laws” is not widely known, it is fairly common knowledge among the political and religious powermongers, allegedly representing “holy writ” passed along to Noah prior to the “Great Flood.” According to some, these Laws are to be the basis of the One World Religion being pushed by the “Committee of 300’s” New World Order.
Ultraist intentions are displayed by the Temple Mount & Eretz Yisrael Faithful Movement – Jerusalem, a supposed “fringe group” (with Knesset connections) that advocates as one of its long-term objectives:
“Consecrating the Temple Mount to the Name of G-d so that it can become the moral and spiritual center of Israel, of the Jewish people and of the entire world according to the words of all the Hebrew prophets. It is envisioned that the consecration of the Temple Mount and the Temple itself will focus Israel on (a) fulfilling the vision and mission given at Mt. Sinai for Israel to be a chosen people separate unto G-d, a holy nation, and a nation of priests, and (b) becoming a light unto all the nations [Yeshayahu (Isaiah) 42:6] so that the Name of G-d may be revered by all nations and the Biblical way of life may be propagated throughout the world.”
Providing evidence of a possible One World Religion, on March 26, 1991, U.S. President George Bush signed Public Law 102-14, a congressional resolution on the Seven Noahide Laws (H.J. Resolution 104, Public Law 102-14). Prior to that event, as Val Valerian says, “The bill was passed in the House by a voice vote on March 5, 1991 and was passed by the Senate on March 7, 1991.” The Proclamation was as follows:  ……..
THE CONTROL, WILL BE FROM THE VATICAN, WITH THE JESUITS IN OVERALL CHARGE, HIDDEN BEHIND THEIR SMOKE SCREEN & MIRRORS, &,  FRONTED BY THE “JEWS” . THE CULMINATION OF THE PLAN THAT Fr. HEINRICH HIMMLER COULD ONLY DREAM OF.
ALL THE “BRAIN DEAD” ARE ADVISED TO LOOK UP CONCORDATS
REGARDS  ……….  WASP

http://the-tap.blogspot.co.uk/2013/07/first-jesuit-pope-advocates-merger-of.html
The Tap Blog is a collective of like-minded researchers and writers who’ve joined forces to distribute information and voice opinions avoided by the world’s media.

4 Responses to “Who will rule the one world religion? Watch out for concordats.”