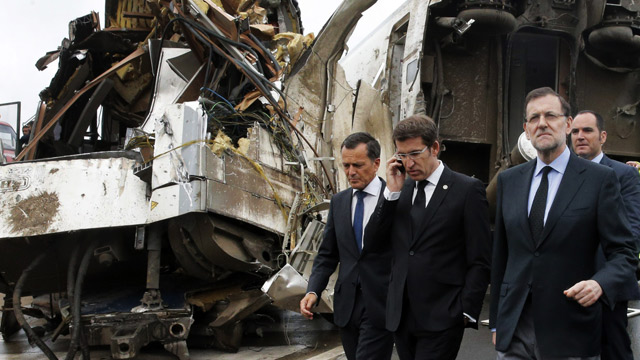 Why was the train travelling so fast?

If you had a corruption scandal hitting the country, which was gathering momentum for you and your government to resign, a huge train crash would provide a useful distraction.

With modern computerized controls installed on trains nowadays, it has long been impossible to go 115 mph around a 50 mile an hour turn. That is exactly what happened in Spain, so we are definitely looking at a control system attack or virus attack as the cause of the crash.

It was an extremely luxurious train of the type that would be carrying important political people and high executives from various companies, and a large number of very important people from the upper levels of the Catholic Church were aboard. The train was only one year old and had the latest computerized controls, which would never have permitted the train to be driven in a way that would cause this crash. This was a case of “boston brakes” with this train.
In the initial Mexican broadcasts, they had pictures of a high level figure who got killed in the crash on the television, but it was a torrential downpour with thunder when I was eating at a taco stand under a tarp seeing it on a cheap TV and I could not hear who it was that got killed because the rain was too loud. The subsequent nightly newscast mentioned nothing about it. Butsomeone very high up got killed in that crash. Now I cannot find anything about who it was on the web. No doubt that will be heavily censored.
I have absolutely no doubt that the train crash was an intentional and successful assassination attempt and if anyone doubts they would hijack and crash a train the way they did Hastings, what about all the suspicious plane crashes, where hundreds of people get killed just because one target was aboard?
What about 9/11?
Commuter trains have had computer controlled speed regulation for over 20 years. Though it may be possible to crash them by putting opposite traveling trains on the same track, having one train go over twice the speed it should be on a stretch of track is not possible. The computers on the train will know where the train is and how fast it is going and prohibit the train from being operated over the max speed for where it is on the track. In Mexico City, the 20 year old subway trains cannot be driven over speed and have the entire course the train will travel under computer control with the operators in a supervisory position, unable to make the train go any faster than it should.
The Boston subway is the same, even the older lines are speed regulated. In Vancouver B.C., the skytrain does not even have an operator aboard AT ALL, the trains are 100 percent computer driven and controlled, and even that system, which is fully automatic is getting close to 20 years old now. Trains are really easy to have full automation on, because the tracks do the steering and GPS and speed sensors do the rest.
So with this train we are looking at either a hack or a Stuxnet type virus attack, and though I saw one report that said the driver was driving the train that fast, I doubt it. Not with something that modern, which was a high class luxury bullet train to boot. Most likely he was watching the sharp turn approach with horror and a dead stick.
Now the job is to find out who was on that train that made it worth hacking and crashing.
http://www.jimstonefreelance.com/
The Tap Blog is a collective of like-minded researchers and writers who’ve joined forces to distribute information and voice opinions avoided by the world’s media.

7 Responses to “Was Spanish train crash an assassination?”