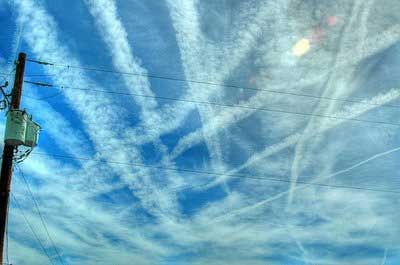 By Neil Foster – Sovereign Independent UK –
For many years Christopher Monckton has been held up by many as the epitome of rational debate on the issue of manmade global warming and has indeed made many friends within the so called truth movement on his seemingly tireless efforts to expose that fraud, which as most, if not all reading this will know, is and always has been part of the UN’s depopulation agenda along with vaccines, GM foods, toxic water and toxic skies or as they’re more commonly known, chemtrails.
One fine day whilst driving from Cork to Dublin with Christopher Monckton in the back of the car with myself, I brought up the issue of chemtrails as they were clearly visible tracing across the Irish skies from every angle that day, so much so that the main weather forecast of the day, on the national broadcaster RTE 1, the Irish equivalent of the BBC, had to comment on the amount of cloud cover caused by aircraft that day. Notice how nervous the presenter is when giving the ‘contrail’ segment of the forecast and how calm she appears once this is out of the way.
Christopher Monckton back then compared these ‘contrails’ to the same emissions coming from WW II bomber aircraft despite myself pointing out that those aircraft flew with propeller engines and were extremely dirty in comparison to today’s highly technical and clean jet engines.
To this day Christopher Monckton, although I hate to use the word, is in complete denial or is part of a concerted camouflage attempt to cover up the almost daily spraying of or skies to the detriment of all living creatures on Earth.
For a man who has exposed the fraud behind the so called scientific ‘peer review’ process, I find it highly suspicious that he chooses such a discredited process as a means to prove the existence of chemtrails or to ridicule anyone pointing out what is clearly visible to their own eyes by labelling them ‘conspiracy theorists’.
I for one don’t think he’s at all in denial on the subject and that he knows full well that this is going on and therefore is playing his part in the globalist agenda as the following video, in  my opinion, clearly shows.
http://www.sovereignindependentuk.co.uk/2013/07/24/christopher-monckton-no-evidence-of-chemtrails-or-depopulation-agenda-sorry-chris-truth-will-indeed-prevail-welcome-to-shillsville/
The Tap Blog is a collective of like-minded researchers and writers who’ve joined forces to distribute information and voice opinions avoided by the world’s media.