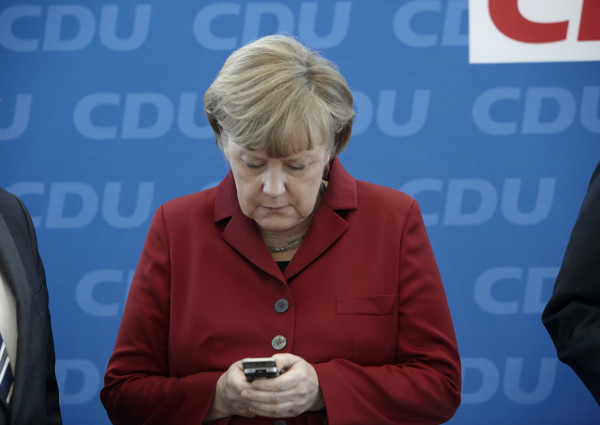 European politicians are incensed. They were everywhere spied upon by U.S. intelligence agencies. Now it dawns on them that monitoring could have been designed especially for them personally. The normal Internet users is not the main objective of monitoring. The intelligence is directed to obtaining information on the “big fish”. Many tremble thus before the next shock: could cost the revelation of missteps, the leaders of the Office.

Of course, the U.S. intelligence agencies know what Angela Merkel writes on her cell phone. The question is: Can they find something that they can use against the politician? (Photo: DWN / Laurence Chaperon)

The NSA scandal has aroused the politicians of Europe. Seldom does one see on a weekend so many excited wing beats. Martin Schulz, President of the EU Parliament speaks of a “total mess”.

Justice Minister Sabine Leutheusser-Schnarrenberger feels reminiscent of the Cold War and has every terrorist suspicion from himself (here). Renate Künast demands full explanation and, if necessary, a case before the International Court of Justice. The CSU politician in the European Parliament, Markus Ferber, speaks of the Stasi and the loss of moral credibility. Sigmar Gabriel, SPD leader, does not want that it can be lit by a glass man.

The reason for the excitement is understandable: the U.S. NSA has admitted to having spied on just about everything in Germany and the EU, which hangs out on the internet. Angela Merkel also said to have been spying. The Americans have hacked e-mails, phone calls intercepted, monitored Internet movements.

This is not news in and of itself.

Employee of the BND and the NSA have been saying for a long time: We accept any information that we can get. We were crazy to think that the emails would ignore the Chancellor. It’s always interesting to see what  Barroso’s role is in this. If we can listen on the phone Martin Schulz, we do so. We have no inhibitions and a voracious appetite.Who knows what’s there so you can find everything.For indeed, is the revelation of the monitoring mainly a message to the political elite: they are heavily controlled.

And usually they have something to hide.Then they will be blackmailed.

As the New York Attorney General Eliot Spitzer: He fell into the sex trap, as he tried to moved the Wall Street criminals to body. A serious mistake: his hotel in Washington was bugged when he met with an escort lady – and he was gone.

Since then, no one is investigating Wall Street.Or Dominique Strauss-Kahn: The unstable IMF chief, a gambler and sex-obsessed, was especially easy prey for his enemies. Strauss-Kahn also began to comment critically on the role of the world financial system. They sent him a maid to oral sex.

Not an hour later, the New York police took him off the plane.And he was gone.

Significant coup for both preparations were necessary, including costs – something for the girls.Thanks to the Internet and boundless chatter of politicians, those who control the system, now lean back.

The work to make the system administrators.

Occasionally, a whistleblower is sent to the public in order to enable the monitored elites in fear and terror. Edward Snowden is the best man on Wall Street. His message is a signal to the elites: We all know what you are doing.

And we will use it against you.

Ordinary citizens should not be surprised that their data is in fact a public good.Any reasonably sentient citizen must be clear that information from the bank accounts of the credit to online shopping or the use of Google, Apple, Facebook and Microsoft all the data in any way are accessible to the authorities.

Naive are those who believe that the authorities would use such data narrowly.The CIA, the FBI and privacy! Much of the data-collecting mania is a kind of government-funded job creation. Pointless, but it creates jobs. To never look because too extensive – but thousands of people sitting 9-17 clock behind your computers and feel pursue employment.Also for statistics such developments are very encouraging.

However, the main objectives of the monitoring are the politicians and the elites themselvesThe system, which is fighting for its existence, does not trust himself.And thanks to email and the internet every politician is a glass man with a transparent life. As Sigmar Gabriel has been right: Every politician is in fact blackmailed by the data.No one is flawless: one has a little extramarital affair. The next one is sexually oriented differently than he says publicly. The next has gambling debts. Yet another has not fully paid his taxes. A cleaning lady who is not subject to social insurance account. Private use of company cars.

These are the little sins.And what about the major sins?

Suppose José Manuel Barroso, German politicians now beg for help: he has always been excellent relations with dubious Greek businessmen. He has repeatedly been on holiday on the yacht Alexandros the richest Greeks in the world, Spiro Latsis. This is known and controversial. What relations does Barroso still fulfill in Greece, in Portugal, elsewhere?At recent meetings of the Bilderberg Barroso was taken by the elites of the world through the wringer, because he has not delivered in Europe. Criticism is one thing. But with monitoring the elites have a lot of other tools.

You can use the data-masses of politicians to perfect their extortion.Tough, accurately, clean to use politicians as drones.The Mafia would be green with envy if the Arsenal, on the have the financial elites.It’s not just about Barroso.

The head of the CDU Economic Council, Kurt Joachim Lauk, in addition to his consulting work for Angela Merkel, president of Globe Capital Partners. The company is a tough U.S. financial investor who looks around in Germany like everywhere in the world for companies that he can assimilate.

Of course, the elites have an interest in what Mr Lauk wrote in his e-mails, with whom he telephoned. Whether he makes good deals, bad deals or makes makes no deals. Of course there are many bankers who are interested in what Mr. Lauk says to Mrs. Merkel over the next few laws that are scheduled about regulatory issues.

Mr. Lauk would do well to write as if there are no private emails.But can he keep this up at all? Are not all politicians rushed and overwhelmed with the new communication means? It is not necessarily the case that one or the other happens exactly the one mistake that is fatal to him at the end?

The FDP or hopefuls Christian Lindner, who was also present at the Bilderberg meeting this year: he was at once CEO of the Internet company Moomax, the bankrupt made later. He has experience of others with the money – the company had received funding and investors. As you read along would like to know who writes the emails FDP leader of NRW his political and business friends. He is passionate about fast cars. He must be extremely careful that he does not drive too fast when communicating.

The risk monitoring for the politicians is considerable.Because monitoring is the precursor to the unveiling.With monitoring the NSA people say the now shivering with fear European leaders: We know everything.

And if necessary, we also will reveal everything.Politicians fear nothing more than a “Leak”.The announcement of controversial details to the media.A friend, an untidy business, a forgotten tax declaration.Something is “leaked”.

To this end, monitoring elites have recently tested the media: From today until an unknown source are the control data of thousands of “tax refugee” comes to the media.The media, always grateful collectors of crumbs that occasionally fall from the abundant table of the powerful have been played brilliantly by the elites in the “offshore leaks” (more on this overture to the witch hunt – here).

They have proven to be a reliable partner for those who wanted something “leaked”.There will be future revelations about this relationship.As much as the media “Privacy” scream when it comes to her Facebook posts, so they are ruthless when it comes to illegally obtained documents. They are blinded by morality dripping when stolen bank data from Switzerland (here).No medium has asked whether it was lawful to use stolen information.For the media, the following applies: All we get is exclusive, legally.For we are the fourth estate.

In fact, the fifth column, which contributes when it comes to the control of the elites.However, this control does not work the way the media that love to persuade. Not the media control the politicians.The power system of monetary elites controlled the politicians. Selected results of the inspection, the media may publish.

The media have been weakened by the economic crisis and submissive. Politicians are extremely vulnerable and weakened by the debt crisis.The news reporting of the widespread surveillance of politicians in Germany and the EU is not the omniscience of intelligence.

Which is as well known as the fact that the sun rises in the east.The news is the panic with which responded to the Monitoring the politicians. When it came to spying on the citizens ‘only’, Mr Gabriel, Schulz and Ferber did not even bat an eyelash.But remember the political elites that they have come suddenly into sight of their former patrons, the financial elite in the final of the debt crisis. They could fall out of favor because the wobbling system looks for scapegoats.

Each email is reckless to the gun, are those of the individual politicians must put himself in the temple.Each recorded, inappropriate phone call can become a cyanide capsule, which must be supplied to the person concerned moved discreetly.

The Mafia control over their subjects pale compared to the way in which the financial elites have a stranglehold over all politicians thanks to the modern information technologies placed in their hands today by the NSA.

One Response to “Politicians start to get it. They are the ones being monitored and manipulated.”