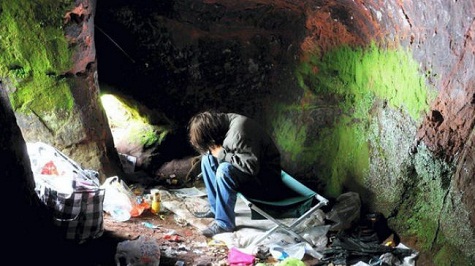 Homeless men and women are living in a network of disused sandstone caves near the town centre of Stockport, Greater Manchester. There have been up to four people a night sleeping rough in the cave system perched on a 20-foot precipice overhanging a river, only a short distance from public view.
A report in the Manchester Evening News noted that Stockport in the north of England has seen a 42 percent increase in homelessness in just one year. Jonathan Billings, a project manager with the local homeless charity Wellsprings, said, “The number of people turning up each day for support has soared from around 60 to 70 to around 140 in the last three years.”
His organization has witnessed a particular surge in demand among more middle class, affluent people. After having worked for years, they lost everything in the downturn, he said. Billings emphasised the risk these people face when sleeping without shelter:
“Unfortunately when people are sleeping rough they will come to very dangerous places. I know of people who have fallen into the river.”
Official statistics published by the government show a five-year high in homelessness across the UK. This includes 54,540 households declared homeless, with some 4,500 households now living in bed and breakfast accommodation (B&B).
http://www.wsws.org/en/articles/2013/07/11/home-j11.html
The Tap Blog is a collective of like-minded researchers and writers who’ve joined forces to distribute information and voice opinions avoided by the world’s media.

One Response to “People in Cameron’s Britain living in caves”