COMMENT –  According to this, as a 1960s survivor of measles, mumps, chicken pox, rubella and whooping cough, I should be sterile / deaf / brain damaged / permanently congenitally damaged / dead. I’m old enough to remember neighbouring mothers taking their kids round to visit so they could ‘catch it young and get it over with’. The most serious case of measles I can remember is a friend who didn’t have it as a child but caught it as a teenager. She was off school for a month but no lasting ill-effects. I remember a lot of kids having the ‘childhood illnesses’ back then, but I don’t remember any life threatening allergies or cases of childhood leukaemia, two things which seem to be disturbingly prevalent among children these days.

TAP – all caused by the vaccines they claim are so good, or the manufactured foods and drinks they advertise as suitable for kids.

I remember vaccine advertisements on TV and at the cinema which showed us film of a mother leaving her baby with a man eating lion. The idea is that this is equivalent to not having the vaccines. I think it was for MMR.

POST –
One of our mothers sent us a snapshot of what was hanging in her pediatrician’s office. Think there is a dash of medical fear being sprinkled on parents? (vac truth.com) 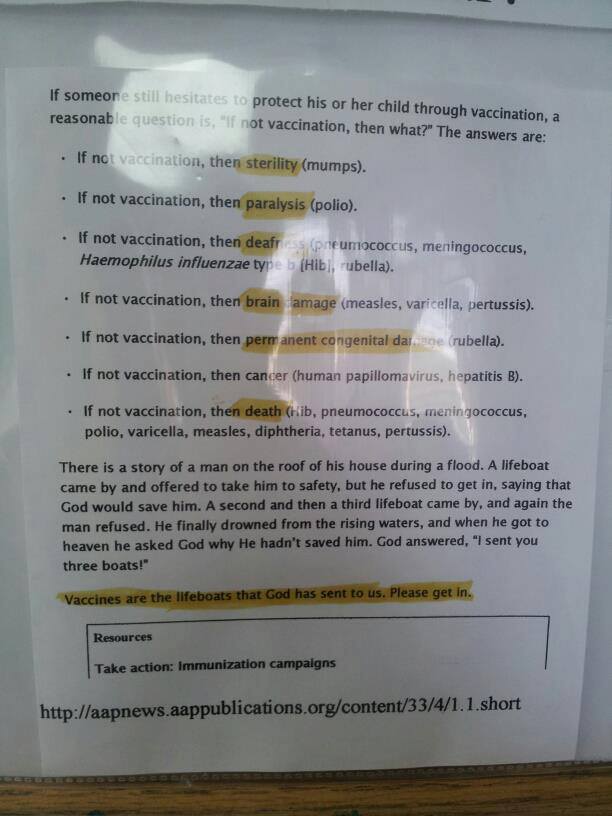 3 Responses to “Paediatricians are terrorists”