The NYC – MTA subway gas tests, as explained in the videos below, have backfired as New Yorkers are angry having found out what likely health costs the testing brings along with it. For agreeing to ‘participate’ in these tests as human guinea pigs, New Yorkers may now face early menopause, failure of the reproductive organs, thyroid and liver problems and the onset of tumors. Was this ‘test’ AGAINST chemical attacks actually A CHEMICAL ATTACK upon Americans? Now that New Yorkers know the truth about this, what else is the government NOT telling us?

This morning, the MTA distributed notifications to straphangers thanking them for participating in a Perfluorocarbon gas experiment. The cards explained that the NYPD and Brookhaven National Laboratory (sponsored by the Department of Defense) would be pumping the “colorless, odorless and powerful” greenhouse gas through 21 subway lines throughout July. Called the “Subway-Surface Air Flow Exchange” study, the exercise is being conducted as a test to ward againstunwanted chemical attacks, but the notification card itself is alarming in itself.
Read closely (it’s the next photo in the article) and you’ll see it says that exposure to Perfluorocarbons has been linked to the early onset of menopause as well as a host of other disturbing effects. 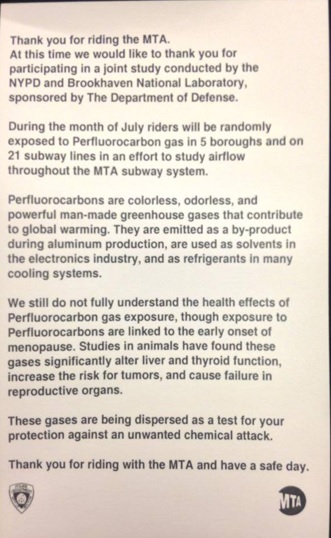