I have studied crop circles in the field, and if they are all man made, they are being done from the air using equipment that we the public are unfamiliar with. There is no way that they are all made with a rope and board, though some of the simpler designs maybe. Many of them have complex geometry which would be hard enough to draw accurately on paper.
It is not that easy to walk between the crops without leaving a trace, not even footprints, I would say impossible. The crops are too high to step over. If you visit a crop circle, you get a feel for it.

Most, if not all, appear on earth energy lines or nodes.
Indepnedent scientists have tested electromagnetics and water samples within the circles,and found significant effects, though this maybe due to the earth energy where they are sited.

I just accessed: Where To Go And Crop Circles – Morris Also Alexander
https://www.youtube.com/watch?v=z4vanrPgZUY by 108morris108.

He says, “I’ve studied it enough to say humans cannot make them…”
You’re wrong Morris. I was working at The Royal Free Hospital radio, Hampstead London c.1994. I interviewed all sorts from film maker Mike Figis to Richard ‘One Foot In The Grave’ Wilson to Glenda Jackson MP. I also interviewed John Lundberg. He invited me to join himself, Rod Dickinson and Gavin Turk to sound record the making of a crop circle. He thought I was nuts offering to sound record a predominantly visual experience, but it worked out surprisingly well. They put the recording on their website:
http://www.circlemakers.org/ra.html

Morris: “There would be footprints…”
You walk between the plants. The plants are sown in rows. After years in London, Kuala Lumpur and Istanbul I am back in the countryside. I walked through a field last night.

“I’m not a believer in aliens, I’m not going there…”
It seems to me ET is a done deal, a subject already covered on The Tap Blog.

“People with no knowledge, no clue, say humans make them…”
Yep Morris, humans do make them because I was there and chronicled the experience. I’m not a disinfo agent or member of any covert group; honest guv! The closest I get to membership of anything is a life long supporter of Arsenal FC and even then I am not a member of the official supporters club.

“You can see when they are man made…”
Obviously, you can’t always!

I have submitted my sound recording to the likes of crop circle enthusiast Colin Andrews:
http://www.colinandrews.net/CropCircleArticle-NedPamphilon.html

Yes, there may be a consciousness energy channelled through the likes of my colleagues on that night in 1994, but I can assure you it was physical men making the pattern with rope and boards; easier than you might have thought – like most magic tricks, easy when you know how. The physical strength and stamina required were impressive and considerable. Those guys were dripping with sweat. I just sat around holding my tape machine and microphone. I did a bit of board work for about 5 mins just to have the experience.

“It’s impossible to do some of those shapes over night…”
Codswallop.

It gives me food for thought when I see 108morris108 analyse e.g. the Woolwich ‘beheading’ or Boston bombing or some other alleged ‘false flag’ operation, and I sympathise with his conclusions, yet then I hear his analysis on crop circles and it raises questions about how accurate his previous comments might have been… and welcome to the world of truth seekers and the internet!

TAP – The crop circles that are partially formed cannot so easily be explained as man-made.  Or was it just growing back a few weeks later? 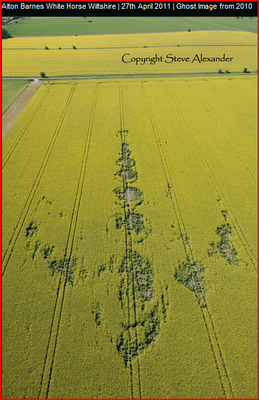