The elites are not trying to hide from us any more.  It’s being put in your face.  We’re the Fourth Reich. we’re going to depopulate the planet by two thirds and we’re proud of it. 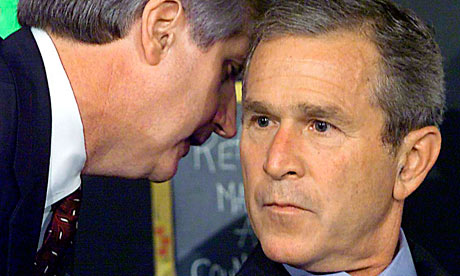 Another way to see 911.  The moment the Bushes opened up a war of world domination to wrest power away from the Rothschilds.

The Bush cabal is currently divided from the Rothschild cabal.  There are mutual assassinations taking place between the two groups.  There is a power struggle within the top levels of the pyramid taking place.

PART 1.
Then she gets into her spiritual stuff, which is fascinating, but very hard to follow.  We are connected by an invisible field, which is an information field.  You yourself are a walking library of information.  People are in a state of forgetfulness.  All humans are spirits having an earthly experience.  Our genetics are ET.  We are a composite of at least twelve ET races.  Try to keep up at the back.

Chemtrails cannot dumb you down because you are a spirit that can reinvent itself over and over again.

The Illuminati/reptilian method is to torture children to control their spirituality – to make them more ready to learn and to control.  The life force energy we all have allows us to regenerate ourselves.  They rape children to force the kundalini? to start rising.  Many people are having an awakened kundalini –  Kerry started meditating and wants to reach enlightenment.  You will cure yourself of every illness you’ve ever had, she says.

You raise the kundalini by visualising a gold channel going up through your spine for rising energy, and a silver channel for its return.   This is pictured as two snakes.  This is occult knowledge.  It raises your IQ level, your sexual energy.  The illuminati don’t want you to know.  You become more psychic.  You have new powers that you can do good things with it or bad.

Reptilians feed off fear, love.  If you aren’t purifying yourself, it can diminish.  Teenagers have very high levels of kundalini.

Bilderbergers are dehumanised on every level.  They are taught to see us as slaves, cannon-fodder and so on.  There is a augmentation of the vibrational level taking place on planet earth.  Some are able to rise with it.  Others are left behind.

Aleister Crowley came out and flaunted his magical knowledge.  Some of the ‘super soldiers’ are coming out and talking.  They use occult knowledge to control you, so you need to understand it to be able to deal with it.

We are all magicians in training, same as the Bilderbergers.  They may be further along, and members of secret societies.  They are time travellers.

The third eye – the ability to see the future, to read each other – is very valued by the Illuminati.  If they can see the future, see ghosts, see ETs, they can use the knowledge to control you.  The snake is a symbol of the kundalini.

Music is a big one.  There is nothing wrong with an awakened kundalini.  It’s what you do with it that matters.  It gets put into debauchery, drinking etc.  Humans don’t realise what to do with their kundalini once it’s been awakened.  Music stimulates the kundalini.

Egypt has a heightened sense of awareness, simply because you are near the pyramids.

How does she know all this stuff with such certainty?   Pyramids. Stonehenge are linked.

All military bases are built on portals where the power can then be utilised, on ley lines.  I can’t believe that Tap Blog readers will want to get too involved with the spiritual message from Kerry Cassidy, but it covers the topics that concern us and seem to offer some kind of explanation.  Humans can connect emotion with intelligence, and this is a unique capability amongst other ET races, who envy our capabilities.

PART 2.
She describes techniques that she uses when interviewing programmed people to make them open up.  The difficulties of the relationships with Camelot are covered.  The Voyager Books are recommended.  She talks of ‘The Guardians’ – a group of ETs, who are positive.  Don’t look at the people like David Icke, like Alex Jones – look at their message.  Truth resonates with you.  If you sense truth in their message , go with it.  Don’t focus on their personalities, or aspects of their personalities.

Negative ETs and the Illuminati want to turn human beings into robots, using nano tech.  They want to clear up the earth, remove two thirds of the human population at least, and get control over all the ET races.  The secret space programme is going on now, terra-forming.  They are changing the atmosphere of planet earth to favour beings who can handle the changes, and to kill off the mass of humanity.  The programme is being rolled out.  Fukushima.  The Gulf.

The effect of interviewing super soldiers etc is that they are so pleased to be telling the truth, they get soul relief.  They get two hours of attention and fame.  It changes them.

Weather is being used as a weapon.  There is no normal weather anywhere on earth.  Scott Stevens wrote a book called Weather Wars.  Dutchsinse is tracking HAARP signatures before events occur.  The Illuminati pick up the phone and call for rain where they are, if there’s a fire.

The deserts could be terra-formed and given water, and humanity fed.  They don’t want humanity to survive.  You are too unwieldy and need re-programming all the time.  The Police disappeared from The Bilderberg fringe.  It could have been an attack.  I’m sure they wanted to.

Alex Jones is discussed.  He incites emotion in a crowd, but he needs to steer the emotion and stop it going negative.  He gave a great speech.

Movies are seeded with information about what’s coming.  Several movies show the White House being bombed.   The Illuminati always tell you ahead what’s coming – to make the karma OK.  It relieves them of the payback because you are too dumb to notice and do anything to defend yourself.  The Illuminati are our adversary.  You can use your psychic energy to stop things happening.

Race of robots.  Possible scenario.   Knowing what they’re planning enables you to plan a strategy, to respond.  People start to realise that events are false – like the Boston Bombing.  The internet is uniting our consciousnesses and it’s powerful.  It is growing.  The people of the world who want positive things for their children, to see humanity blossom, new inventions, new growth is an explosion happening, overpowering the negative.

We’re like plants growing up through the concrete.  We want humanity to thrive.  Limited freedom is not enough.  Press freedom within a little enclosure is no good.  There was no water or food provided at Bilderberg.  Don’t settle for fluorescent lights, for mercury in lights in third world countries, which will spill out during earthquakes.  Become a light warrior.  They want to take you out.  No doubt about it.

Annunaki – Enki was Satan according to the supersoldier interview on Camelot.  Actually it’s Enlil not Enki who favoured humanity.  Enlil wanted to turn humanity into a submissive race, which did affect some elements within humanity.  Some groups had the rebellious gene, became a little too creative – and they had others who followed orders and were more peaceful and placid.  It’s time to start developing a rebel gene.  There’s no way we’re going to change the power balance on earth unless we are rebellious.

British are too reserved and don’t convert their energy into action.  Earth has been subdued for far too long.  Sitting in schools in rows is programming – to make you into a good little robot.  Don’t let it happen to your kids.

QUESTIONS –  The bees?  Monsanto are part of the Illuminati plot to weaken your immune system and destroy food production.  Our being is heavily influenced by the mind.  It doesn’t matter about radiation and so on.  You don’t need to accept cancer and illness into your body.  You can put shields around yourself.  You don’t have to get old at the age they til you to get old.  Don’t be fed by the advertisements about cancer.  Don’t buy it – don’t listen to the ‘get cancer’ message which is being put out by the government.  You must die soon because we want to have a new race of humans here.

You are a soul first.  You are a spirit first.  Your body comes second.  Every disease you ever have starts in your mind.  Your body is the last place you become ill.  You allow illness in.  When you realise that the soul comes first, you will deal better with other people.

Q2.  Kerry was prevented from talking at Bilderberg.  Icke and Jones were fine but Camelot would rock the boat, but she got permission from a friend which was later cancelled, and she was stopped from speaking.  She is here in the UK to try to interview Julian Assange.  The powers that be are trying to keep a lid on Camelot.

The Bilderberg event was an historical event.  MPs like Michael Meacher were on the same stage as David Icke, Alex Jones and Camelot saying they no longer had the reigns of government in their hands.   The mainstream is opening up.

Q4.  Optimism?  Yes.  I don’t know why I’m so optimistic as I know all the information.  Kerry’s excited by the gains that she can see.  There are wins in her work all the time.  When she gets insiders talking truth on camera, it gives her a wow feeling.  Life on earth is a grand experiment.  We will overcome the evils we face.  Out of all negatives come incredible positives.  It’s part of our unique ability.  Humans are magical beings.  It gives inspiration.

This time around we are changing the paradigm.  People are able to see things now that are changing their lives and their way of seeing and understanding the world.  People who were once suicidal are now able to live happily because they understand what the trouble is all about.

Q5.  About movies.  Congress seminar.  The question being asked was ‘who’s running this fracking planet?’  The military industrial complex had taken over under Eisenhower, when he threatened to invade Area 51.   They kill free energy scientists right and left.  Story of one scientist who was so terrified he wanted to bury all his life’s work.  He was broken by the threats he faced.