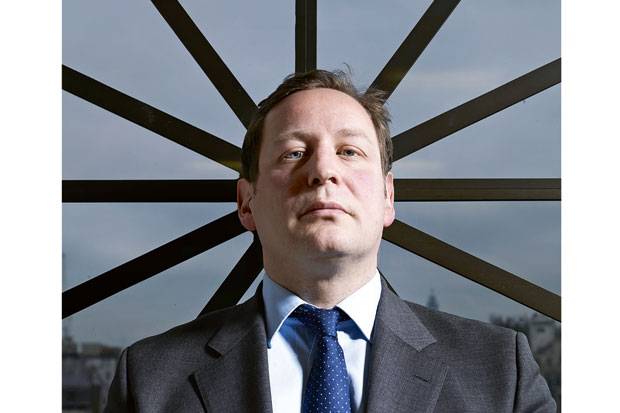 Ed Vaizey.  Monumentally dumb.
Last October, I launched UKIP’s energy policy at our Party Conference.  I warned that Britain faced a real prospect of electricity shortages and black­outs by 2020, unless serious action was taken.  I said that wind turbines could not fill the looming gap.  I said we needed more gas – the only power stations that could be built in time.  And we need coal and nuclear.
That was seen by some as alarmist.  Yet today, we’re vindicated.  We have Ofgem warning of blackouts not by 2020 (as I’d predicted) but in two or three years.  The Coalition’s energy policy is in a shambles.  The media are full of stories about the coming energy crunch and the failure of renewables.  “Crunch time as UK faces battle to keep the lights on”.  “Storm clouds over wind farm hand-outs”. Read it here.
The message is even getting through to the old parties at last.  Daventry MP Chris Heaton-Harris has been organising resistance to wind farms in Westminster.  Dominic Raab hails the announcement that Britain has huge reserves of shale gas, and demands that we take on the vested interests ranging from Friends of the Earth to Vladimir Putin and Gazprom.
George Osborne is making positive noises on gas.  The only person who really hasn’t got it is Ed Davey.  Bizarrely, having previously made a small cut in wind farm subsidies, he’s now reinstated the earlier levels.  Too bad he’s the Secretary of State for Energy.
Letter: the true cost of wind farms
Letters editor,                                                        Published June 23rd
The Sunday Telegraph,
Dear Sir,
Your main story on June 16th (“Revealed: true cost of wind farms”) was an excellent exposé of the eye-watering costs of wind farms and the industry’s absurd claims of job creation.
Yet it missed perhaps the most fundamental point, demonstrated by (amongst others) Prof Gordon Hughes of Edinburgh University.  Wind is intermittent.  It requires conventional back-up, and that back-up must also run intermittently to complement wind.  But the back-up (typically gas) is very inefficient when run intermittently.  Like most large-scale industrial processes, it works best when run consistently.  Thus the net energy contribution from wind farms, and the claimed reductions in emissions, are largely off-set by the inefficiencies in the back-up.
Worse than that, the EU is now talking about “capacity payments” to compensate back-up gas-fired power stations for down-time when the wind blows — otherwise such power stations would be uneconomic and could not be financed.  In effect, we are subsidising wind farms twice over, saving no emissions, but driving prices up, driving industries aboard, and driving pensioners into fuel poverty.  This lunacy must stop.
Watch out for the smart meters
We are hearing more and more about “smart meters”, with various proposals to “roll them out” across the UK, whether we like it or not.  On June 18th, I attended a dinner-debate briefing in Brux on the subject.
And I tried, I really tried, to understand what benefits they offer to consumers.  Yet I came away unconvinced.
They tell us that we’ll get correct electric bills in real time, perhaps monthly, rather than those irritating “estimated” bills.  Yet so many of us pay by direct debit on a monthly basis, and it will make no difference there.  For those who pay based on the bill, does it matter if we pay a few quid more or less this quarter when it gets adjusted next time round?
Then they tell us that smart meters will enable us to see how much we’re spending on a minute-by-minute basis, and thus help us to economise.  As if we had nothing better to do than watch a meter constantly, and go turn something off.  The lights?  The central heating? If we want a breakfast cup of tea, will we look at the meter and decide to leave it till mid-morning?   This is a fanciful idea.
The promoters insist that studies show a reduction of 4% in homes with smart meters (although I wonder if this lasts after the first rush of excitement).  Ofgem estimates typical household consumption at 3,300 KWH, with the average bill around £500.  Save 4%, and that’s £20 a year, say 5p a day.  Not worth crossing the road for.
There’s more to this than they’re telling us.  They want to be able to “smooth” demand.  They expect a new generation of domestic appliances (freezers, for example) with a chip that can talk, via the smart meter, to the utility company.  Then they’re looking at “voluntary agreements with consumers” enabling the supplier to cut off the appliances to smooth demand.
How voluntary will that be, when push comes to shove, the wind doesn’t blow and the wind farms are idle?  The government is already this month talking about cutting off power to factories to smooth demand, and we’ll see how voluntary that will be.  The plain fact is that Big Brother wants to get inside your home and turn off your appliances at will.  You’ll hear more of this.
Roger Helmer MEP
The Tap Blog is a collective of like-minded researchers and writers who’ve joined forces to distribute information and voice opinions avoided by the world’s media.

One Response to “Energy lunacy. Get ready to freeze.”