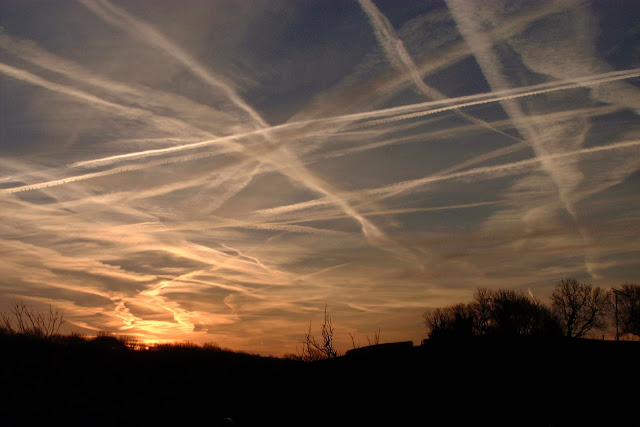 Chemtrails.  The normal sky on TV is now like the above.  It’s anything but normal.

19.55 PM. 5th July. Friday –  Murray’s held on to the second set.  Janowicz is fretting about when the roof’s going to be closed on the centre court, Wimbledon, and the lights go on.  It’s not even 8 PM.

The camera pans the sky.  There are three chemtrails across the face of the sun, dimming the available light,  making the timing of the roof closure earlier than it would have been otherwise.  Yet all dear old robotically-controlled Tim Henman can say is ‘on a bright evening like this evening’, with no mention of the reason as to why the sky is not a s bright as you would expect at 8 PM at the beginning of July.

Wimbledon commentators have clearly been briefed about chemtrails, so that even when they’re staring straight at them, they don’t exist.  Got it?  Here we have another series of oafs being paid to keep their brains turned off, and their mouths shut. 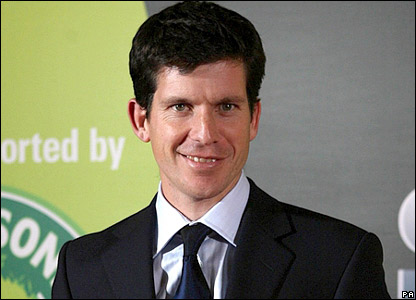 McEnroe, the other BBC commentator, a man known for telling it like it is, doesn’t mention the light, and realises how dumb he’d look if he started calling it a bright evening, like Nice but Dim.  Come on, Henman.  Stop insulting us and demeaning yourself.  Now tell us what kind of evening is it again?  Why will the roof have to shut and the lights be turned on so early on a bright summer’s evening in early July?

8.40 PM Janowicz asks for the roof to be shut after losing the third set, which is very unfair to Murray who’s broke back from behind and has the momentum.  They could have played one more set under ‘normal’ circumstances, and would have done in days gone by.  That’s the measure of chemtrails.  Light’s gone by 8.45 PM when a few years ago it used to last another hour.  Big discussion by all the commentators but no mention of the real story.  NATO’s spraying the sky and light’s being dimmed, day in day out.  Tennis is affected in many ways by the earlier onset of dark and, last week the cold, causing multiple injuries on Wimbledon’s wacky Wednesday.

If Tim really doesn’t get it as to what’s going on above his head, here’s a great video which spells it out from passiglight‘s channel, using time-lapse.

And here’s the BBC Sport Wimbledon titles for 2013 – covered in chemtrails.  Is the BBC promoting this as normality? Poor old Tim Henman. I guess he needs the money.

10 Responses to “Wimbledon Centre Court. Come on Tim Henman. Open your eyes, your mind and your mouth.”