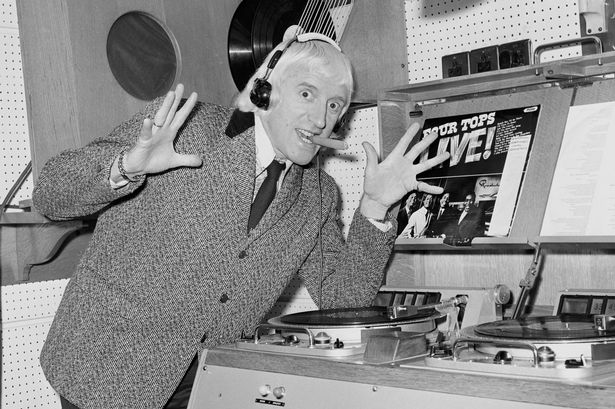 Stunned officers chipped away plaster at a ­record shop wall and unveiled a hidden list of names thought to belong to young victims of Jimmy Savile.
The vile register, which contained the names, ages and a disgusting ratings system seemingly used to mark their sexual performance, was scrawled on a secret wall buried behind layers of wallpaper and plaster.
A source revealed: “The wall looked like something straight out of a horror movie. There were lists and lists of names of the victims – it’s a shocking discovery.”
The list of girls and young women is thought to identify ­hundreds of potential new victims abused at the hands of the BBC DJ and it raised fears Savile was at the centre of a celebrity paedophile ring.
Police believe the major breakthrough could lead to further arrests – including other well-known celebrities.
The wall also appeared to contain the names of girls the sick group hoped to target in the future.
Officers who raided the shop in ­Greater Manchester after a tip-off will now try to trace the alleged victims.
A source said the raid had provided the clearest evidence yet to show Savile was part of a larger group of monsters.
The source said: “Savile appeared to be using the room above the record store as some kind of secret HQ to plan his vile acts.
“There appears to be some suggestion that he was not acting alone either.
“There were others who appear to be involved, several others, some of whom are household names.”
As the specialist officers ripped away the layers from the wall, the names of up to 200 new ­people they believe he and accomplices attacked or planned to
attack during the 1980s and 1990s were ­gradually revealed.
At least one other well-known BBC figure and several celebrities are now being linked to the probe. Suspects face being quizzed in the coming weeks.
http://www.mirror.co.uk/news/jimmy-savile-celeb-arrests-could-2097740
The Tap Blog is a collective of like-minded researchers and writers who’ve joined forces to distribute information and voice opinions avoided by the world’s media.