Beyond Snowden: US General Cartwright has been indicted for espionage

While the world focuses on Washington’s pursuit of NSA whistleblower Ed Snowden, another much more high ranking member of the US power structure has been indicted for espionage this week…

US General James Cartwright was regarded by Washington insiders as ‘Obama’s General’, and now he’s facing prosecution for blowing the whistle on ‘Operation Olympic Games’ which planted the Stuxnet and Flame viruses in Iranian nuclear facilities in order derail Iran’s civilian nuclear program. At closer examination, it appears that Cartwright’s revelations didn’t so much harm US interests per say, but they hindered Israeli ambitions towards a war with Iran.

But why espionage? What is the line between “whistleblowing” and “espionage” in America today?

While the international press plays up the information leaked by Edward Snowden as a revelation concerning the PRISM surveillance program, feigning to have discovered what everyone should already have known for a long time, Thierry Meyssan, is particularly curious about the meaning of this rebellion. From this perspective, he attaches more importance to the case of General Cartwright, who has also been indicted for espionage.Thierry Meyssan

Are American public servants, civilian or military, who face a minimum of 30 years in prison for revealing U.S. state secrets to the press “whistleblowers” exercising power in a democratic system, or are they “resistors to oppression” at the hands of a military-police dictatorship?

The answer to this question does not depend on our own political opinions, but on the nature of the U.S. government. The answer completely changes if we focus on the case of Bradley Manning, the young leftist Wikileaks soldier, or if we consider that of General Cartwright, military adviser to President Obama, indicted Thursday, 27 June 2013, for spying. 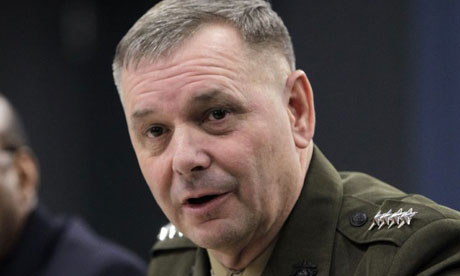 Here, a look back is needed to understand how one shifts from “espionage” in favor of a foreign power, to “disloyalty” to a criminal organization that employs you.

2 Responses to “Beyond Snowden. US General Cartwright indicted for espionage.”