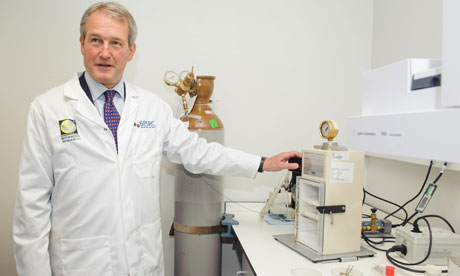 Monsanto’s UK sales rep – Sec of State for the Environment – Owen (‘GMOs are a no-brainer’) Paterson.  By chemtrailing the air, and contaminating the soil with aluminium and barium,  only Monsanto seeds will be viable and be able to grow.  Monsanto are getting control of the world’s food supply, giving total power to the elites.  Paterson’s the gullible patsy.

Unless you are geographically located in a dozen or so countries in the world who have declared GMO (genetically modified organism) bans, then you’re likely eating GMO. It’s almost impossible to avoid all GMO foods, however educating yourself can make a big difference in the percentage of foods you purchase as a consumer.

Baked goods: Often has one or more of the common GM ingredients in them. Why do we need corn or soy in our bread, snacks or desserts? It’s hard to find mixes to use as well. Some brands avoid GMs, find one you like and try to stick with it. Organic is one option, learning how to cook brownies, etc, from scratch with your own organic oils is another.

3. If You Eat Beef, Purchase Beef That Is 100% Grass-Fed.
Most cattle in the U.S. are grass-fed, but spend the last portion of their lives in feedlots where they may be given GM corn, the purpose of which is to increase intramuscular fat and marbling. If you’re looking to stay away from GMOs, make sure the cattle were 100% grass-fed or pasture-fed (sometimes referred to as grass-finished or pasture-finished).

4. Shop Locally.
Although more than half of all GM foods are produced in the US, most of it comes from large, industrial farms. By shopping at farmers’ markets, signing up for a subscription from a local Community Supported Agriculture (CSA) farm, or patronizing a local co-op, you may be able to avoid GM products and possibly save money at the same time.

5. Buy Only Whole Foods (not referring to the store).

Favor foods that you can cook and prepare yourself, rather than foods that are processed or prepared (e.g. anything that comes in a box or a bag, including fast food). Whole foods typically do not contain added ingredients, such as salt, carbohydrates, or fat. Examples of whole foods include beans, fruits and vegetables. The term is often confused with organic food, but whole foods are not necessarily organic, nor are organic foods necessarily whole. They key is to learn which whole foods are GM and which are not. What you lose in convenience, you may recover in money saved and satisfaction gained, as well as increased peace of mind. Try cooking a meal from scratch once or twice a week–you may enjoy it and decide to do it more often.

6. Grow Your Own Food
This way you know exactly what was grown, and what went into growing it. Buy heirloom seeds still maintained by gardeners and farmers particularly in isolated or ethnic communities. Many heirloom vegetables have kept their traits through open pollination, while fruit varieties such as apples have been propagated over the centuries through grafts and cuttings.