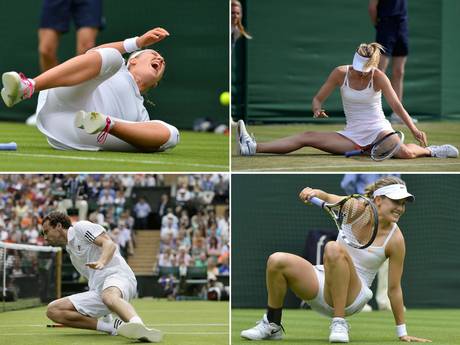 They called it Wacky Wednesday in the Wimbledon commentary teams.  How come so many players were injured in one day?  Players always slide on the grass, so why were so many injured this year, when they normally slide, roll, stand up again and play on?  This year they fell out of the competition a dozen a day.  It was a freak, is all the BBC could suggest.  A ‘wacky Wimbledon’ became the media narrative, recognisable as it cropped up so often.

The real reason for the injuries and the drop-outs is obvious, but not possible to be stated by the BBC and the media.

The weather is cold.  Or rather the weather is yo-yoing between warm and cold with incredible frequency.  In years gone by a change in the weather was an event that took place very noticeably, every ten days or so.  Now it goes from warm to cold almost by the day, or even during each day.  Average temperature figures are becoming meaningless, as the yo-yo takes temps up and down by ten degrees.

The down swing of the temperature yo-yo makes it unseasonally cold, and players are being exposed to the coldest tennis environment they ever play in, as well as one that puts them at full stretch.

It’s cold because of weather modification, chemtrails, and other methods of geo-engineering.  They don’t want people to notice the cold and the strange pattern that weather has gone into, so a high incidence of tennis injuries has to be explained as something ‘wacky’, and beyond rational explanation.

Particulates in the atmosphere, and chemtrail clouds are not being cut back for Wimbledon.  The gloomy weather goes on, and so do low temperatures for the time of year.  A slip and a slide in warm air is no problem.  But when it’s cold, knees, ankles and tendons snap.  Previous injuries, which all players have, start to hurt.  Never before has the competition been played out in such cold conditions, yet not a mention in the media, or even by the regular Wimbledon commentary team.

We do live in wacky times, don’t we.   In a few more years the competition no doubt will be cancelled because of unexpectedly wintery conditions.  It’s only unexpected if you’ve no idea what’s going on above our heads in the sky every day of the year.