You never know which way these things are. He could be guilty or he may not be following NWO orders and this is what happens to you if you don’t do what you are told.

I’m convinced that DSK (IMF) was set up to get him to stand down. 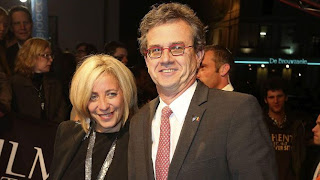 In a fast-developing story, U.S. ambassador to Belgium Howard Gutman has been named as the diplomat accused of soliciting “sexual favors from both prostitutes and minor children,” according to State Departmentdocuments obtained by NBC News. Gutman denied the allegations, in a statement to The Cable and other outlets.
“I am angered and saddened by the baseless allegations that have appeared in the press and to watch the four years I have proudly served in Belgium smeared is devastating,” he said. “At no point have I ever engaged in any improper activity.”
Gutman came under the spotlight on Monday after CBS obtained an internal memo from the department’s inspector general detailing eight examples of alleged misconduct by staff or contractors ranging from soliciting prostitutes to obtaining narcotics from an “underground drug ring.” The report also alleged that the agency tried to cover up instances of misconduct, something State Department spokeswoman Jen Psaki called “preposterous.”
http://thecable.foreignpolicy.com/posts/2013/06/11/belgian_ambassador_denies_accusations_he_had_sex_with_minors
The Tap Blog is a collective of like-minded researchers and writers who’ve joined forces to distribute information and voice opinions avoided by the world’s media.

One Response to “U.S. Ambassador to Belgium Denies Accusations He Had Sex With Minors”